“There’s literally tons of carbon here,” she said, looking around the bog, which covers several acres off a muddy oil-company road amid the vast flatness of northern Alberta.

I think this sentence could be two meaning grammatically like: 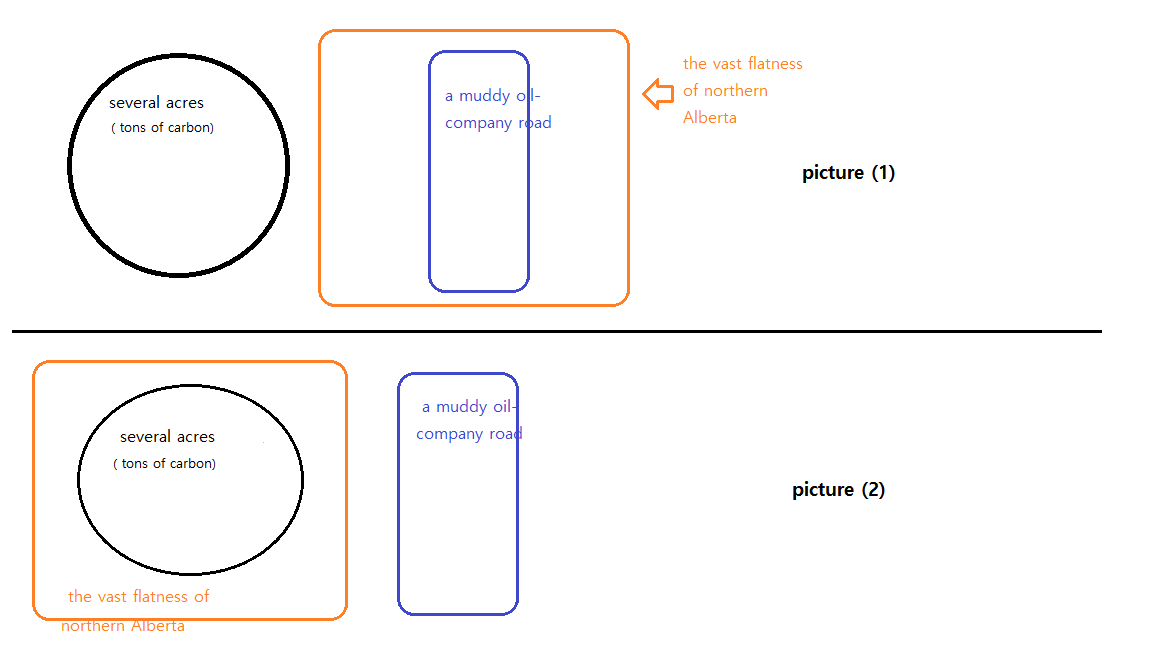 and, i don't know which picture should be a right meaning semantically.

Mostly ditto StoneyB, but let me say it a little differently.

In real life, the most sensible reading is that the acres and the road are both in the vast flatness. "Vast flatness" is not something then tends to have clearly-defined borders. If someone said, "the vast flatness ends here", someone else might reply, "no, it goes a hundred miles further south than that", but they'd be unlikely to say, "no, it goes 9 inches further south than that". The end of the "vast flatness" is likely vague within several miles, at least. So it's unlikely someone would say that a road runs past a bog and the road is in the vast flatness but the bog is not, like the flatness ends exactly in the space between the road and the bog.

Preposition phrases can be "stacked", just like ordinary adjectives, and the precise scope of each term can be ambiguous—is a "little red dog" a [little [red dog]] or a [[little & red] dog]?

In many cases the difference is so trivial it need not be disambiguated—does it really matter which parsing we bring to "little red dog"? In other cases, the difference is resolved by the 'world-knowledge' shared by the writer and the readers. That's the case in your example: the acres adjoin the road, which we assume to extend in both directions well beyond the acres, and both are set within ("amid") a "vast" territory—Alberta has an area of quarter-million square miles.

Not the answer you're looking for? Browse other questions tagged meaning grammar or ask your own question.