A name for a finger gesture (not “the bird”, “thumbs up”, or V-gesture) 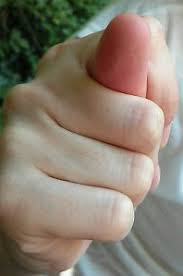 It hardly has any sexual connotation (like showing a middle finger, "the bird") and basically means that the one the gesture is being made at will never get what he wants, hopes or asks for, either from the one making the gesture or from anyone at all. I think verbally, it's close to the English "No way" or "Fat chance", in rather a crude way.

What I'd very much like to know is whether this gesture is known/popular in any of the English-speaking countries? What is it called and what does it mean? Is it really offensive or just sort of rude and yokelish if made at, say, not very close an acquaintance?

The gesture is called the fig in English. It is not well-known in the US at least, and I would not expect anyone to use it or know what it means. I believe the same is true in other English-speaking countries.

I've never seen this in ordinary life, but I'm familiar with it from Elizabethan drama. It was called the "fig" then in English, too; the name derived from the Romance tongues—the earliest citation in OED calls it a "Figge of Spayne", compare It. fica, Fr. faire la figue.

It is not clear whether the use of a fig as a contemptuous epithet or exclamation, current since about 1400, was the same term or not.

It had in the Renaissance an emphatically sexual connotation, representing the penis between the lips of the vulva.

Not the answer you're looking for? Browse other questions tagged word-usage word-request definition or ask your own question.

13
A term for this gesture (signs by hands) on the wall/screen
12
What is the term for the morning wake up gesture?
25
An adjective for a woman showing lots of skin?
1
An obvious model/example/type of someone or something
4
Name for the people who hustle you into restaurants
1
Why do more people say “smashed finger in the door” than “crushed finger in the door”?
0
Put your finger in the air
0
What is the properly way to say “I made a mistake due to carelessness”, meaning that I did it accidentally and without intent?