The phone has a case in flowers

The phone has a case in flowers.

Is the sentence correct or should I change it? (I mean the picture of flowers, that the case is covered with flowers.)

It seems to me strange and I would change it into:

The phone case has flowers.

What's your opinion on that? Is the sentence in my question correct?

Your sentence is not incorrect, but this is a tricky thing to express.

For example, if you and your friend are both looking at the phone case, you could say:

That phone case is covered in flowers.

(Note: You could use the preposition with instead of in; the verb covered allows for both.)

One the other hand, if you were describing the phone case via a text message, and the other person couldn't see it, you might want to be a bit more precise, and provide more specific details. After all, we're talking about the picture on the case, not the case itself.

So, we could say:

The phone case has a picture with many flowers.

This can actually be a tricky thing to describe unambiguously. For example, let's say the phone case looks something like this: 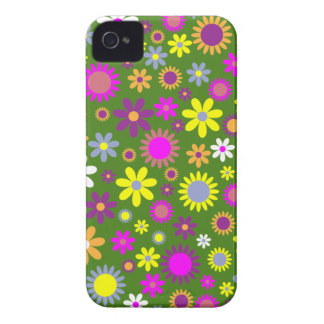 In that case, you could say:

The picture on the phone case has a bunch of flowers.

This would be correct, but the word bunch, when used in conjunction with flowers, might make a person think of a flower bunch:

The picture on the phone case has a flowery pattern.

So it's not going to be easy to say it in a way that isn't prone to some kind of misinterpretation. I might say something like this:

The phone case has a lot of different flowers in a random pattern.

That is a pretty accurate description, but it took me some effort to come up with that wording. Even then, some might rightly complain that random pattern is an oxymoron.

This is something even a native speaker might have to think about to get right.

Not the answer you're looking for? Browse other questions tagged word-usage prepositions or ask your own question.

4
Can I simplify “It would appear to be the case that …” to “It would appear that …”
2
You can still contact me “through” your phone vs. “via” your phone?
2
Turn toward here case
1
In our phone English class vs on our phone English class
2
On the wallpaper is a horse - is the sentence correct?
0
There seems to be a few leaves in your hands
1
I make ten phone calls (in) a day
2
In case of, In case of a/an, In the case of
0
That's the book of the God in which we believe
0
“Ends in” or “ends with” a phone call