Context: She has known him for more than ten years.

In the above mentioned sentence, every word can separately be analyzed grammatically. For example:

In order to understand grammar in detail, I am trying to focus on the usage of words in different contexts.

Rather than trying to split a sentence directly into words, it's often more instructive to break it down into phrases, each of which breaks down further. This lets us see the overall structure better.

One useful tool is a parse tree, which lets us visualize the structure. For example, we might parse your sentence something like this: 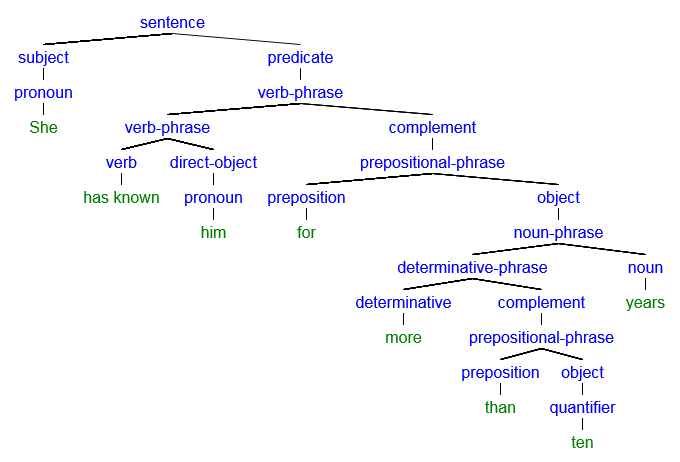 As you can see, the object of for is actually more than ten years (not just more than); and I've classified the numeral ten as a quantifier (following the terminology of the Cambridge Grammar of the English Language), though you could also call it a determiner, specifier, determinative, adjective, or even noun.

(Note: even setting aside terminology, the structure shown in the above parse tree is not the only possible analysis. A lot of the details are debatable, there are different schools of thought, etc.; but it should give you a sense of how to think about syntax.)

1
"Six women were there" - is six a noun or an adjective?

3
"could" has various meanings depending on context
4
Present Perfect with another Present Perfect in the same sentence
5
pronouns as subjects or objects
2
Why is “I have learnt English since 2 years” incorrect?
0
Can we use an infinitive clause with no object in order to specify a purpose?
2
Difference between Present Perfect and Past Simple ( I am not a beginner )
1
How to choose tenses in story telling?
1
"All students" vs. "All the students"
1
sentence analysis