Verb form of "must needs"

Then touching the shoulder of a townsman who stood near to him, he addressed him in a formal and courteous manner:

"You must needs be a stranger in this region, friend," answered the townsman, looking curiously at the questioner and his savage companion, "else you would surely have heard of Mistress Hester Prynne and her evil doings. She hath raised a great scandal, I promise you, in godly Master Dimmesdale's church. "

As far as I know we always use first form of the verb after "must". For instance: "You must go". We never say "You must goes". Also, we never use -s/es with a verb that comes with "You". What are the circumstances in which writer has used "needs" after "You must" in "You must needs to be a stranger in this region."?

Needs here is not a verb but the noun need = "necessity"; the -s is the genitive suffix which in archaic Englishes might express an adverbial sense, so the word needs may be regarded as an adverb. (Note that The Scarlet Letter is set in the middle of the 17th century, and the dialogue often employs the language of that period, such as hath.) In this case needs means "of necessity, necessarily".

A few such constructions have survived into contemporary English. For instance:

And the same construction lies behind once, twice, thrice, though it's concealed in the modern spelling with ‹c› for ‹s›.

EDITED TO ADD, from the first edition of the Oxford English Dictionary: 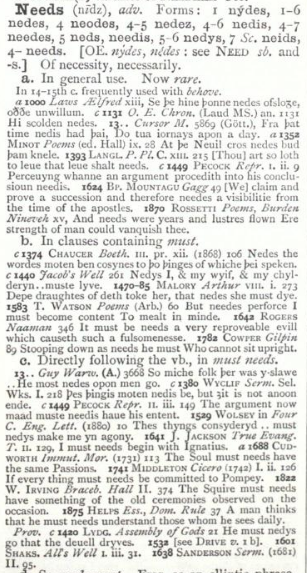 'you must needs be' is an archaic form of 'you must indeed be', and I don't know of any strict rules that govern its use. I'd venture to say the expression is no more in current use than 'wherefore is she' instead of 'why is she'.

0
What kind of future verb tense is this: "will needs continue"?