Is "thirty past seven" acceptable?

If it is seven thirty, we can also say "half past seven". I am wondering whether "thirty past seven" is acceptable.

"Half past seven" is the common expression. The following picture may help you and please see here: 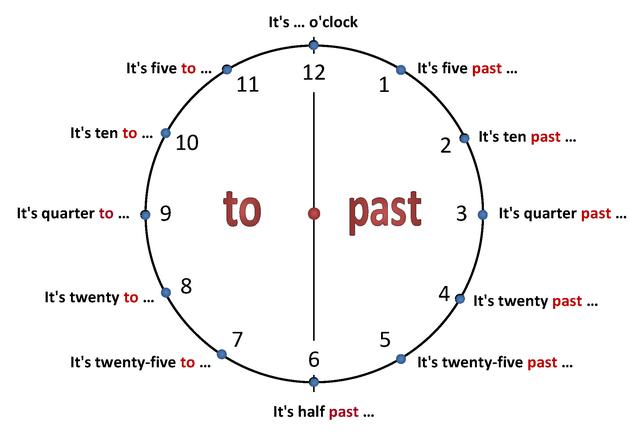 And, in my experience native speakers will not say fifty-nine past seven, since it's kind of "idiotic" not to say, instead, one minute till eight. However, forty past and even fifty past are not uncommon.

Other answers have shown that there is a lot of variation in what is "normal".

The answer to the original question, though, depends on what you mean by "acceptable".

If you mean "will I be understood?" - the answer is yes.

If you mean "will I sound natural" - the answer is no.

"thirty past" is not in the set of "normal" variations of how we say time.

are all natural sounding.

Only the less-than-ten numbers need a slight adjustment.

"ten eight" would not even be recognised as a time, and "ten two" sounds like "ten to", which is means "ten minutes to the hour" the same as "fifty minutes past the hour"!

Instead, for minutes less than ten

is the way we say it, presumably because that makes it "look like" a time:

(where "oh" is the alternative pronunciation of the number zero)

"Thirty past seven" would be readily understood, but "sound funny" -- it would take an extra few seconds to process.

Times are generally expressed as laconically as possible: "What time is it?" "Quarter after"/"Quarter past", "Ten to"/"Ten of" if the relevant hour is probably known, e.g., the questioner and questionee have been waiting together, and the question has been asked recently enough. If the hour is needed, the questioner can then ask "quarter after what?"/"ten of what?"

Some people answer generally: "Quarter after" for any time in the range 13-17 after, if there's no reason to suppose exactness is desired.

And of course some try to answer precisely: "my watch shows 13 after 7" / "according to my watch, 9 minutes before 7".

Half past seven would be the most natural way to express this, however seven thirty is far more common. The past/to expressions are not extremely common. I more frequently here quarter till (short for quarter until) or quarter after, with the hour unspoken and implied when relative to an event happening now. I very, very rarely hear anyone say ten to eight, I almost always hear ten till eight or ten till here in the northwest US. Half past is used more than half after but seven thirty is by far the most common way to express it.

The past and to expressions are more commonly used in literature, having a distinct pacing and warmth that the common form of time does not.

Not the answer you're looking for? Browse other questions tagged expressions time or ask your own question.

3
Do native speakers say 'on the dot' or 'sharp' for all times, including 10:23?
2
Use of "in case of" sentence in past
1
Can I say 11:30 as eleven and a half?
1
Past Progressive and Simple Past with the Time Clause (While)
1
Is my expression grammatically sound?
2
How to tell the time in written form
0
Is the expression "confound it" a euphemism?
19
Can I say: “The train departs at 16 past every hour“?