I am trying to understand the metaphor "wet my beak" from the famous American movie "The Godfather: Part II".

In the film a local mafia boss in New York City tells the protagonist (an Italian immigrant who has just begun to experiment in crime):

Young man, I hear that you and your friends are stealing goods...
You should let me wet my beak a little.

(idiomatic) To drink a beverage.  [quotations ▼]

So, I understand that the mafia boss is saying that one wants to take his share from the financial proceeds of illicit activity. However, I an still unclear on the idea behind this metaphor.

Why is the mafia boss likening himself and the protagonist to birds? Why not some other animal, like dogs, wolves, bears, etc?

If they are birds and the water is their financial proceeds of illicit activity, then is the protagonist taking a bird bath?

They are not using the bird metaphor to suggest that they are like birds, but to express the meaning that the idiom conveys. He is saying that he wants to take part in the illicit activities to have his own share. "Wet my beak" is a metaphor for drinking, so if they let him have a drink with them, they can "enjoy" together. 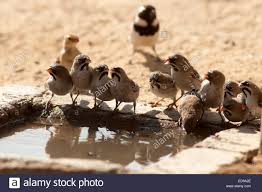 The concept in The Godfather is that if you are doing business in the Family’s territory or a business they control, then tribute is due. What he is conveying is that he won’t take their whole operation and only wants a bit, a small portion, like a bird dipping his beak in a pool, as tribute to allow the operation to continue.

It is not the larger Animals you ask about, because they will drink a LOT more from the pool. They do everything big, they are big and consume much, compared to the tiny little bird. Which is VERY IMPORTANT in this metaphor, because the implication is to say. "You won't even miss my share, it is so small, like a tiny bird take a sip"

If he make his change to their current operation seem as inconsequential as possible, there is easier cooperation from protagonist. Not have to break legs, just to use the words. As to say "this should not make you feel concerned, it is nothing to even notice.. my (little) sip, from your (large) pool"

Also to imply he is a bird, is to come at them more peacefully. than to admit he is a dangerous carnivore... that truth will show its teeth on the best avoided second request if they do ignore the first.

0
Is "at the poke of" a metaphor? Or an idiom?
1
Metaphor VS. Symbol
0
Metaphor is correct or incorrect
2
What on earth could this metaphor imply?
0
White whale metaphor
6
Is "sailed into" used as metaphor?