If we cut an apple into two slices, what should we say? 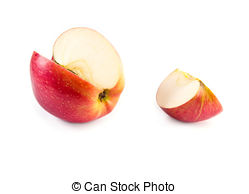 some apple (singular) : the apple has been diced (or some apples have been diced) and the chopped fruit is not countable

some apple slices : slices of apple

an apple : a single whole apple

half (of) an apple : one half of an apple

an apple halved: an apple cut into two equal pieces

an apple quartered: an apple cut into four equal pieces

Your picture shows an image for which there is no precise word. We would have to say something like "An apple with a quarter (of it) cut out". 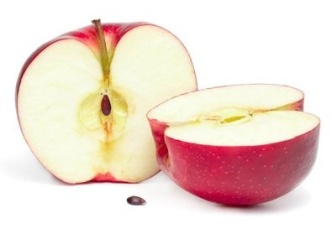 This is the image of an apple cut into half.

There are two apple halves, or two halves of an apple. (They mean exactly the same)
We can count the number of apple pieces.
A person might ask for half an apple. 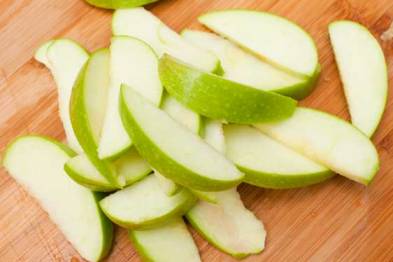 This is a picture of some apple slices.
We can also say some sliced apples, if we know more than one apple has been sliced.
It's not easy to count all the slices, so it's just quicker to say some.
You could also ask for some apple if you wanted more than two slices or pieces. 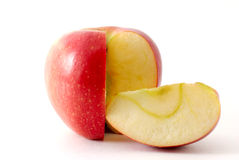 This is a picture of a single apple and a quarter slice. As you can see, the apple is not cut into two slices. The apple has not been cut into four quarters. (Alternatively) It has not been quartered.
Although we can see it is countable, some people might ask for some apple, or ask for the larger/smaller piece.

slice
a flat, often thin, piece of food that has been cut from a larger piece:
cucumber/lemon slices
Layer the pasta with slices of tomato.
Could you cut me a smaller slice?

quarter (noun)
one of four equal or almost equal parts of something; ¼:
He cut the orange into quarters.

Not the answer you're looking for? Browse other questions tagged word-usage word-choice determiners quantifiers .