When to use conjunctive adverb: "otherwise"?

The correct answer to the #50 is J. I was to ask what does the phrase "far from heavenly" mean? To me, it seems that the narrator disagrees with Frank Sinatra; therefore, I consider that H could also be a possible answer.

How can this issue be solved? 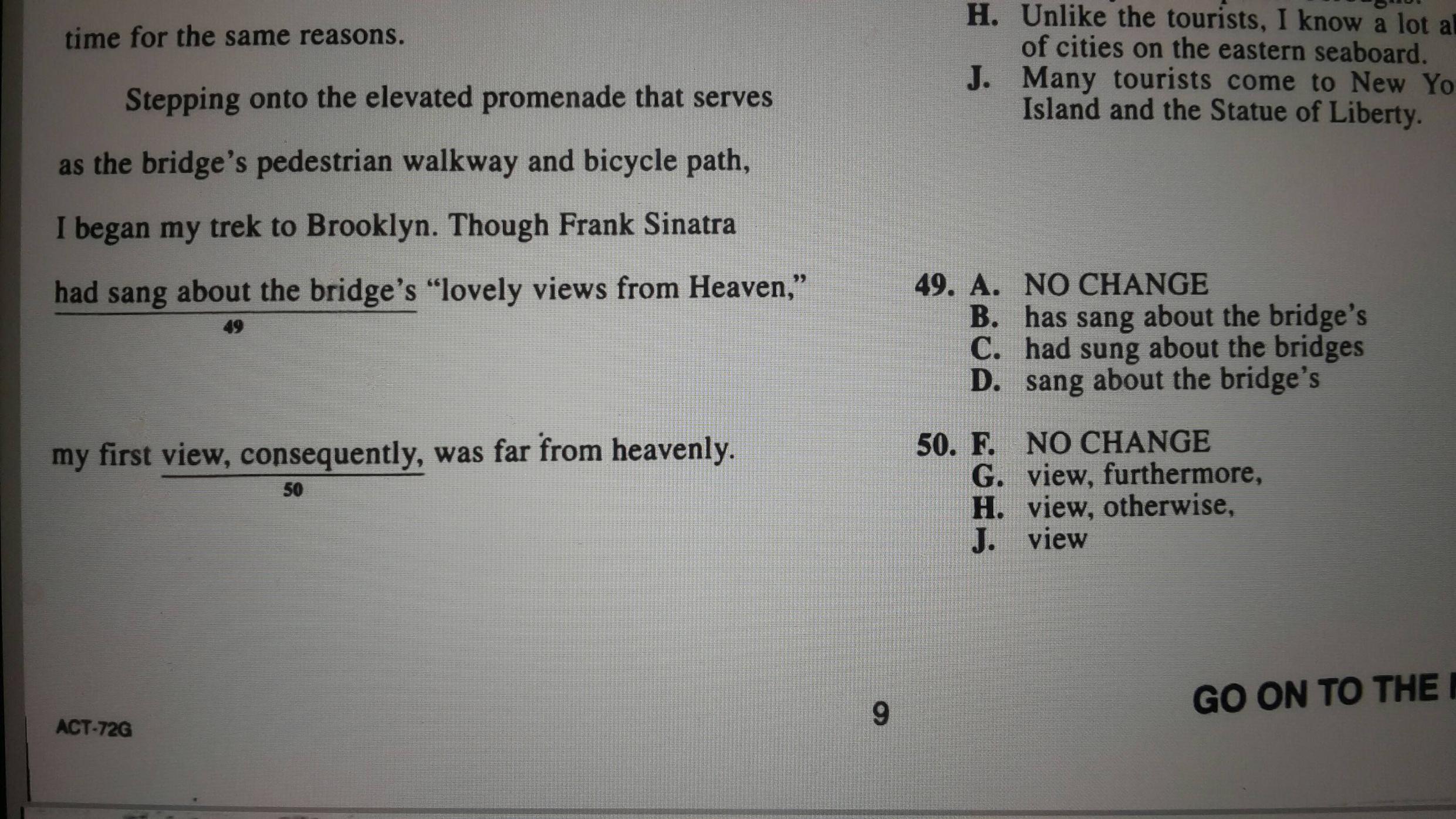 You're right that the narrator is disagreeing with Sinatra. "Far from heavenly" is a strong way to say "not heavenly."

An important word in the sentence is the first word, though. Though is used to introduce contrast between two phrases; its meaning is like if but or however were used between the phrases.

The original text uses consequently, but this doesn't make much sense; that adverb should only be used when you're describing a consequence of something. For example, "All the shops were closed, and consequently we couldn't buy any food."

Otherwise doesn't need to be used here to suggest contrast, because though already does that. Furthermore, it doesn't make grammatical sense to use it here. Otherwise, as a conjunction, is used after a hypothetical scenario, such as an order or suggestion, to discuss the result if that scenario does not happen. But in this case, the first phrase is not hypothetical; it's not an order or a suggestion. It's a fact: Frank Sinatra did sing about the bridge's "lovely views from Heaven."

You are right that otherwise can suggests that something is different. Adverb positioning is somewhat flexible, but the positioning of 50H would not be right. Here is an example of a correct usage:

The police believe he is the thief, but all the evidence suggests otherwise

To fit the pattern of the question in the test, the sentence would have to be:

Though frank Sinatra sang about the bridge's "lovely views from heaven", my first view was otherwise.

When used between commas, otherwise has the meaning except for what has just been referred to.

The buffet meal was disappointing but the evening was, otherwise, a complete success.

Not the answer you're looking for? Browse other questions tagged adverbs conjunctions or ask your own question.

0
how far does it take, or how long does it take?
1
"Someone was refreshingly honest when [...]": is the adverb an obfuscated adjunct?
0
From behind - preposition or adverb?
0
Can we use a subordinate conjunction after the conjunctive adverb?
0
Main Clause + [; vs .]+ Conjunctive Adverb + , + Main Clause
2
Can a noun be an adverb?
1
In "You will end up alone", is "alone" an adjective or an adverb?
0
The position of the conjunctions and adverbials
0
"Besides" as a sentence-initial adverb
1
Are all same: disjunct, sentence adverbs and conjunctive adverb