What is the meaning of the so-called “pregnant chad”?

They’re not passing it on, they’re not voting for anyone, they’re wasting their PR like so much pregnant chad!!!

I encounter the above from here. I have looked up the dictionary but find it confusing:

How can a chad get pregnant? And how does it relate to the context in my case?

And I have tried to find its image.

This is a jocular use of metaphor drawn from voting with punchcards. The 'chad' on a punchcard is the little oblong of partially cut-out paper which the punching device is supposed to detach from the card. If the voter doesn't punch hard enough or cleanly enough, the chad is not completely detached. The different sorts of attachment have nicknames: 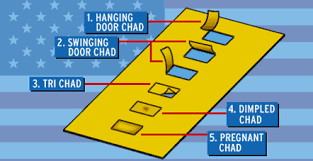 A 'pregnant chad' is so called because it is still attached at all four corners but puffs out like a pregnant woman's belly.

'Hanging chad', 'dimpled chad', 'pregnant chad' and the others entered US popular discourse in the controversy over the 2000 presidential election, when the decisive and very close vote in Florida was determined in part by the decision that votes with incompletely detached chads were invalid and should not be counted.

It's a very appropriate metaphor in this article because the author treats PageRank (PR) as an 'election':

PageRank is a “vote”, by all the other pages on the Web, about how important a page is. A link to a page counts as a vote of support.

A 'wasted vote' is metaphorically equivalent to a 'pregnant chad'.

1
Usage of “Keep Any Shape”
3
the meaning of 'be strung out on consonants'
5
Meaning of “passing surmisal” in a poem by Francis Thompson
0
1 hour ago though it is already about 110 minutes
4
What does the “seven to four” imply or what does the speaker mean by saying “seven to four”?
1
What is the meaning of “the shot told”?
1
“illuminate the issues at stake” meaning
0
What does the saying “Don’t feel pregnant” mean?
1
set back down here
0
“Get across smothering”