How common is the usage of "yous" as a plural of "you"?

Yesterday I was exposed to the fact the "yous" is a plural form of the pronoun you. while historically I know that "you" is actually the second person plural pronoun while the singular form is "thou".

My question is how common or widespread the use of this form (yous) in the spoken English from one side, and in the formal English on the other side (in Britain and Canada or even in USA? I just don't want to be strange or weird if I use it.

I asked this question due to my exposure to this post on Facebook which I found in its thousands comments - many times of usage in the pronoun "yous" (I've attached just some examples from a lot in the same post which its commentators using "yous". 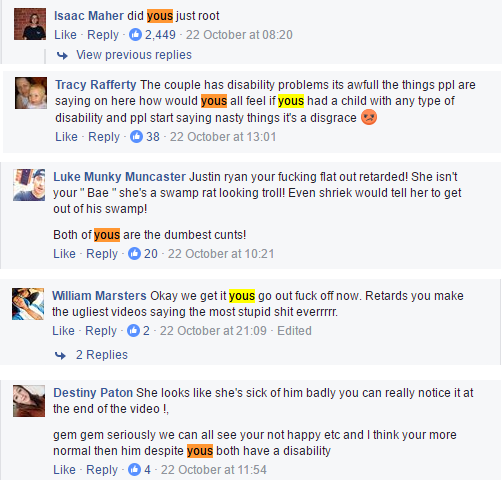 This is a funny question to an Australian. Yous is commonly heard in Australia among people who are popularly referred to as bogans, but is also heard in the more regional parts of the country. A bogan is someone who is a little rough around the edges, probably poorly educated or sometimes just pretending to be (A 'bogan' who went to a private school since kindergarten is a particularly interesting phenomenon). As mentioned before though, it's not exclusive to bogans.

Anyway, it is generally seen as not proper English when used here which is funny because I hate saying 'you guys' or 'you all' and would like to be able to say "ya'll" or "youse". Sometimes I say, 'What are youse guys doing tonight?' to my friends for a laugh but as I said its usage is not widespread.

According to this usage note yous/youse is used in informal speech especially the northeast of the United States. The usage appear to have been common especially among immigrant communities whose first language had both the singular and the plural forms:

Less than 1% of people reported saying you, yous in response to the question.

Image of Choice B for yous, youse:

Yous, youse is, um, used mostly in such northeastern cities as New York and Boston, but even there it is not used by the majority of speakers. It is used mostly by lower class, less educated, (older) people.

Given that Texas (low central dot) Arkansas (dot just right of it) and Florida (extreme southeast) are warm weather states, one can hypothesize that these dots represent relocated, possibly retired people. The three dots on the extreme left are in California, which is full of people relocated from other areas of the USA.

As noted in the comments and in other answers, yous, youse is also used by some speakers of British English, (northern England, Scotland, Ireland), Australian English, and New Zealand English. It is a dialectal variant of standard English. As a nonnative speaker you will sound strange or weird if you use it.

In Ireland, the use of the plural form of you is very common in 2 forms: youse and ye. 'Youse' is used mainly in working class areas of Dublin but is also heard in informal conversations in workplaces around the city and hinterlands. The use of 'ye' is even more common amongst people outside of Dublin, used in both formal and informal situations. In a lot of situations, the use of one of the other would be a strong hint as to the user's place of origin - Youse for blue-collar Dubs and Ye for culchies (country people). As a Dub with parents from the country, we used ye at home and youse at school (and the bus). The use of both forms is discouraged in formal conversations, in written and broadcast media, when dealing with non-native Hiberno-English speakers and when speaking to people from more self-conscious societal groups who substitute their use with 'You Guys (pronounced Goys)' (Southside Dubliners and teenagers).

A lot here are saying that if you haven't heard "yous" spoken in England, you should try visiting Liverpool. I'd also like to add Newcastle to that. The most prolific user of "yous" I've ever know was a geordie.

As some people have already said, it is also fairly common in Scotland. I've never seen it written down anyway that you might call "formal usage".

In Yorkshire we still say "thou" and "thee", although "thou" is actually said (and written, but only informally) as "tha". I have heard some people say "thas" which is equivalent to "yous", but this isn't common at all, probably a slip of the tongue like when one says "sheeps" by accident.

It isn't common in British English. I've never heard it in England, but it is used sometimes in informal speech in Scotland, in phrases like "all of yous". The Scottish accent tends to pronounce the vowel in "you" and "yous" to rhyme with the French "tu" - a vowel sound which doesn't occur in standard British English. In Scotland "yous" can be singular as well as plural if it is used for emphasis, in a phrase like "It's yous I'm talking to!!" or "Will yous stop doin' that!!" (pronounced with a very distinct gap between the two s's in the words "yous stop"). 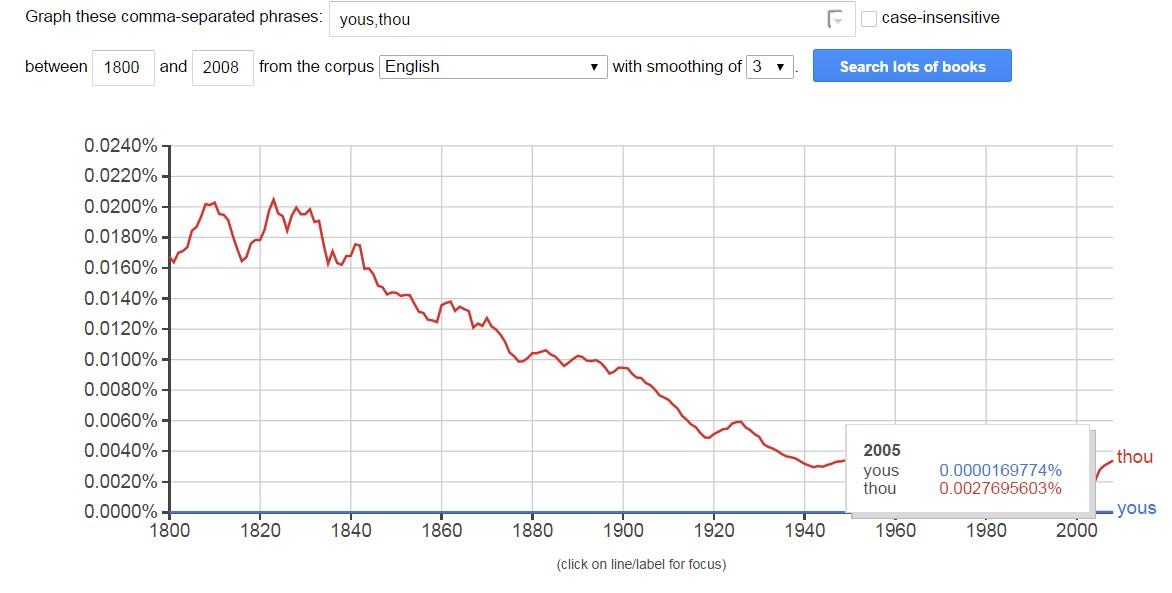 Frequency of the usage of yous,

and thou according to Collins Dictionary.

I have to point out another French resemblance, but instead of tu and "you" as alephzero presented, there's a closer resemblance with vous:

The sound of Assiduous's example in particular:

yous at all OR youse at all

Is strikingly similar to:

(Plural or Singular in a formal context) you(s) await

Since in French, the s at the end connects with the vowel of the next word to form a z kind of sound in both cases. If the next word does not start with a vowel, then the sound is simply vou/vu which sounds more like "you".

This is just a resemblance I noticed, I could not find any historical proof that the English language was influenced by the French language in this particular case. However, vous origin is related to a Latin pronoun which also influenced the Italian voi, the Spanish vos and the Portuguese vós, which is yet another similarity that may help understand this resemblance:

Relating to the question itself, the origins of the English dialects where yous is used may be important for knowing how frequent the word is spoken or written.

You should avoid using it.

In my 12 years growing up in the Northeast and 30+ years living in the South, I've never heard it used anywhere in the United States except in old gangster movies from the 1920s and 30s spoken by goons.

"Y'all", on the other hand, is quite common in the US South.

Not the answer you're looking for? Browse other questions tagged word-usage pronouns singular-vs-plural dialect .

2
Can I use "it" to refer the plural noun "the fees"?
1
Singular or plural? How much
0
How do I describe plural things I saw?
0
Is it common to write "dreams" (in plural) even if it's composed of only one objective/item?
0
Usage of plural form
0
Everyone with plural usage
0
How to use the word "food" in the plural?
0
Usage of plural nouns with and without 'the'