I'm always getting these types of mobile homes mixed up. Could someone please explain the difference between the following?

I can give you a British English definition as I own such vehicles...

A caravan is a trailer towed by a car: 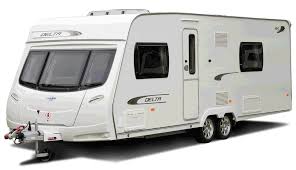 A camper van (or campervan) is a van of ~1 ton converted for sleeping & cooking. These are typically VW Transporters or Mazda Bongos. There are still huge numbers of lovingly preserved VW campervans on the roads (I have a classic T2 and a T5): 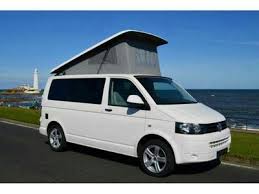 A Motorhome is a purpose built vehicle, larger than a campervan. These are coachbuilt onto a commercial chassis. The chassis are usually Peugeot or Fiat. They come in varying sizes but are rarely more than 3tons: 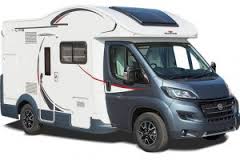 You will find people "in the scene" who get very picky about how their vehicles are described. Some people will get upset if you refer to their motorhome as a camper for example.

We British do recognise the term RV as being an American equivalent. However, in Britain, when applied to British vehicles, the term is usually only used for the very large: 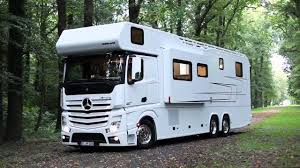 A mobile home is a generic term for a purpose-built "vehicle", designed to be lived in and transported around. It may be either self propelled, or a towed trailer (hence the scare quotes on vehicle). A mobile home necessarily includes sleeping quarters, a toilet, and (usually) a bathing facility. They also have specialized connections for hooking up to gas, water, or electricity points. The important connotation here is something able to be easily moved, and suitable to live in long term.

An RV is necessarily self propelled, and fully capable of being driven legally on highways or interstates. This is not to be confused with other recreational vehicles (e.g. ATVs, dirt bikes, snowmobiles, etc.); while that's what RV stands for, usage of the full words to mean a vehicle you can live in is extremely rare. An RV is a fully fledged mobile home.

A motorhome is the same thing as an RV.

A trailer is necessarily not self propelled, and must be towed by another vehicle, possibly requiring a commercial grade cargo truck to move. This term is rather generic, though, because trailers vary greatly in size and quality. Trailers are not necessarily fully fledged mobile homes, but we do sometimes use the term trailer home to indicate a large, nice, or more permanent trailer, which is a proper mobile home. The term trailer park refers to a dedicated piece of land for (many) people to lease and live on, permanently, with appropriate utility connections. Trailer is often - but not necessarily - used in a pejorative sense. People who live in trailer parks are generally viewed as poor, uneducated, and uncultured; they're trailer trash. Mobile home and RV do not permit this negative connotation, and if someone makes a point of telling you they live in a trailer home, then they're usually signalling that they are not trailer trash.

A camper is a specific kind of trailer. It is small, able to be towed by a standard car or truck, and used for traveling or camping outdoors. It is not suitable for living in permanently, and usually does not have toilet and bathing facilities. Campers may also have sections which expand and collapse, such as the top piece of the camper van in Chenmunka's answer. We don't use the term camper van, though; that specific vehicle is extremely rare, even unheard of.

A caravan is not something you live in. We use this term as a synonym of convoy, but with a more folksy or antiquated connotation, as opposed to the industrial or military one of convoy. It evokes imagery of an old fashioned line of carts traveling along and containing a troupe of performers, tradesmen, or pioneers.

One of the key differences between the British uses is that the American terms don't connote specific brands at all. We are also not picky about swapping different terms around; indeed, which one you hear used predominately depends on the regional dialect. Taking dialects into account, mobile home, RV, and trailer are roughly interchangeable. Yes, even though I just said RV and trailer technically are exclusive categories, it is possible to hear them used to mean the same thing (a generic mobile home), depending on where you are in the US.