What's “brass tacks” got to do with “essential facts”?

Recently, I found myself using this idiom to justify writing a rather short and terse email to someone.

Getting down to brass tacks, I'd like to remind you that...

The idiom is just a different way of saying of “let's get down to business”, “we've wasted enough time in chatter”, and “time to get serious”. According to Anatoly Liberman for the Oxford University Press Blog, the earliest citation is from Texas, in 1863. As to its meaning, Liberman cites among them the following theorem

Brass, or bronze, tacks, used in boat-building, do not rust, and are far superior to so-called ‘tin’ tacks for durability.

These sturdy brass tacks were later used to decorate leather furniture, boxes, and upholstery. They added the pleasing finishing touch but do not explain why the idiom getting down to brass tacks is synonymous with the facts of reality.

I've read that the origin of the idiom is American, but that it's also popular in the United Kingdom. Is that true of Australia and Canada too? 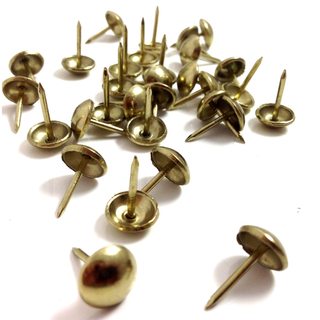 To answer the first part of your question: nobody really knows.

There are a number of suggested origins:

No. 2 supposedly refers to buying fabric in a store, and taking it to the brass tacks (the measurement device, made of brass tacks hammered into a surface at precise intervals to measure distance) to ensure you get a correct or accurate quantity. In this case, when you are taking the fabric to the measuring device, you are "getting to" where that device is, with "down" possibly referencing the lower height of the measuring device (perhaps as compared to rolls of fabric, which are often stacked high):

get
Verb
4.1 [no object, with adverbial] Move or come into a specified position, situation, or state:
"she got into the car"
"Henry got to his feet"
"you don't want to get into debt"

down
Adverb
1. Towards or in a lower place or position, especially to or on the ground or another surface:
"she looked down"
"the sun started to go down"
"he put his glass down"
"he swung the axe to chop down the tree"

1.4 To or at a place perceived as lower (often expressing casualness or lack of hurry):
"I'd rather be down at the villa"
"I'm going down to the pub"

No. 3 may refer to reupholstering furniture, as to do that you would need to take out the brass tacks holding in the fabric, and with those tacks being on the underside you would need to physically move down under the furniture ("get down to"). It may also be similar to (get to) the bare bones of (sth.), since the tacks are part of the chair's construction rather than aesthetic additions (like the outer fabric on the chair). Arguments against this include that the phrase appears to date to the 1860s, whilst brass tacks have been used in upholstery for far longer.

Both No. 2 and 3 are supported by the synonymous phrase get down to brass nails,[F,H,J] since tack is another word for a nail:

To answer the second part of your question, the origin of the "get down to" part is also uncertain. In what seems to be the first usage of the phrase, it is written as "come down to" instead:

"No one we apprehend will accuse Washington of a want of patriotism, unless he have some other object than the truth in view. For doing what he did, we, with others, accuse people of selfishness, but we should in justice add that when you come down to "brass tacks"—if we may be allowed the expression—everybody is governed by selfishness, and if the merchant, who refuses to take what is due him at 50 cents on the dollar, is selfish, the debtor who insists on his doing so, is just as selfish."

The piece doesn't explain the reasoning for using the phrase, but goes on to use it several times in a discussion of economy and currency:

"If the present currency ('brass tacks' again) is worth but two for one to buy gold, food clothing, houses, lands, negroes, sheep and cattle, it is in other words worth but 50 cents on the dollar, and will itself be bought, sold used to pay debts with or loaned out at that rate. We do not say what ought to be done, and what patriotism would seem to require. We are simply speaking of what is and will be until human nature becomes altogether another thing from what it now is. Who but a financial fool or a gambler or a speculator (patriotism is out of the question) would borrow currency now to be repaid a year hence in legal tender? What then? Why (down to the brass tacks) borrow at the current exchange rate and pay again at the exchange current at the time of payment."
— para. 6

"We urge the merchants to take the money through motives of patriotism and fund it. We urge the planters to fund it likewise. We urge everybody to show their patriotism practically instead of trying to get everybody else to do it for their individual aggrandizement. We ask the people generally to come down to "brass tacks." If they will theorize, act on their theories, and if they will not act on their own theories, let them not lay themselves open to the charge of hypocrisy and dishonest greed, by demanding of others what they will not grant themselves."
— para. 11

Note that this piece was published in 1863, and so is now in the public domain (and so it is legal for large portions of the text, or the complete text itself, to be reproduced).

Brass is, and historically has been, more expensive than steel.

If you go to the hardware store and buy 'brass' tacks, you're probably buying brass plated steel tacks.

Take them home, hammer one into a block of wood and file it, and it will turn silver color - it's steel underneath.

Above is facts, below is speculation.

as noted above, boatbuilders used brass tacks, and I'd imagine people tried to cheat and sell them plated tacks. Underwater, the difference is important. So 'getting down to brass tacks' is to remove the plating, and, metaphorically, to arrive at the the core metal.

this construction is still common in industrial shops. "Get down to bare metal", "get down to core metal" means to remove a surface coating.

Parallel construction to "let's get down to business." Probably many other ways to express "getting to the heart of the matter"! English is so rich in its idioms. I don't really think we need to go to the hardware store for this one; although, I could see a reference to the quality of brass vs. steel, as was mentioned above.

Not the answer you're looking for? Browse other questions tagged phrasal-verbs idioms or ask your own question.

1
“got” in “You've got to be kidding me!”
7
Can we say 'she got out of her/the bed’ with a determiner?
1
“looked to the brass eyelet-holes”: why “to” and not “at”? What is the meaning?
1
Is “got held up” a phrasal verb?
5
Contextual expression and Get/Got It
2
Somebody's wife got pregnant
2
What's the meaning of “pop on a plane”?
0
What's the difference between “walk someone over to” and “walk over to”