They write in their school diary (or) diaries?

Currently, I am using a children's English coursebook called Gold Experience A2, by Pearson, it's for a private student of mine. It's supposed to help young learners prepare for the KEY exam, and it covers the basics. In chapter 02 there is a short report entitled Tech-free Teens—is it possible? and the following lines

Here is the image of the text 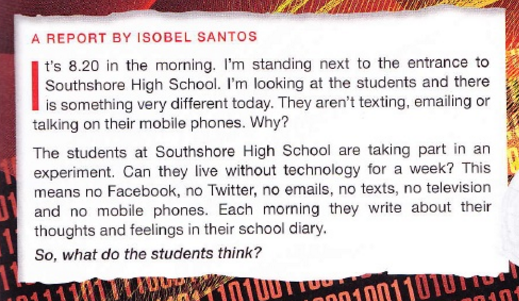 [...] The students at Southshore High School are taking part in an experiment. Can they live without technology for a week? This means no Facebook, no Twitter, no emails, no texts, no television and no mobile phones. Each morning they write about their thoughts and feelings in their school diary.

So, what do the students think?

If I read that sentence aloud, it sounds perfectly normal and OK, but in print I'm less certain. Shouldn't the last noun be plural, i.e. school diaries?
I'm trying to figure out why the author used the singular noun form instead of the plural, and here are my initial thoughts:

Q1.: Is this construction becoming standard in the UK and the US? — Because I have no idea.
Q2.: Why is school diary singular here?

tl;dr: There does not seem to be a general rule for whether a plural or singular is used in a "They wrote in their diary/diaries" type situation but in general the plural seems to be preferred. There are also times when one or the other is strictly necessary.

From what I gather the answer to this question is very far from straightforward. I would recommend reading the language log posts by Mark Lieberman here and here. For the sake of having a less comprehensive but somewhat shorter exposition the rest of this post will mostly be an attempt at a summary.

In the posts Mark looks at a very similar sentence "Ostriches [...] bury their head in the sand" and asks whether this is the correct usage. To him this suggests that the ostriches have one collective head they bury (maybe a shrunk lions head talisman or the Head Ostrich).

Research then shows and I quote:

He further elaborates on this in the next post looking at a rule proposed by judge Posner regarding when the plural and when the singular form is used again I'm quoting, this time judge Posner:

The "virgins of Jerusalem hang down their heads" sounds fine, but so does "In prosperous days They swarm, but in adverse withdraw their head." The difference is that the virgins are acting collectively, in unison; the swarmers are not–nor are the ostriches when they bury their heads.

Mark concludes that this rule doesn't hold water, at least in the categorical sense though he points out he doesn't have the evidence to conclude anything about statistics.

I finish with one more quote from Mark

But more generally, it seems to me, this is a useful example of the natural desire to find a logical basis for choice, in cases where our intuitions are complex and variable, and our actions are even more so. An enterprise of this kind usually forces us to invoke or discover a large number of factors that turn out to be relevant; and in this case, it's easy to think of several relevant factors that we aren't taking into account.

But(sic) the end, linguistic choices are often as difficult to reduce to simple principles as other social actions are. This is especially true when specific choices bring general principles into conflict, as is arguably the case here.

I will point out that this is written from a descriptivist point of view. That is Mark Lieberman is a descriptivist and so when confronted with a question about a point of grammar he attempts to use research on how english is used to determine the answer.

I would say, the singular should be used

Each morning they write about their thoughts and feelings in their school diary.
Every morning before going to Southshore, they put on their school uniform.

With diaries, usually people have their own diary which may be kept secret and not shared, and we also know that in a school assignment setting, each student would have to fulfill the requirement individually. So the scenario might be

All singular. If any were plural, it would mean several breakfasts, varying uniforms, multiple diaries, and separate schools. We know this not to be the case from general experience.

Every morning each wrote about their thoughts and feelings in their personal school diary.

I think this is a sentence that got muddled in an attempt to make it gender neutral.

I presume -- and you say -- that each student has his own school diary. So the traditional way to say this would be, "Each morning, each student writes his thoughts and feelings in his school diary." But people trying to be gender neutral don't want to use "he" to refer to both boys and girls. One common alternative is to recast the sentence in the plural. But that's a problem here. If you say "they write in their school diary", it sounds like all the students share one diary. If you say "they write in their school diaries", it sounds like each student has multiple diaries. Using the plural here was a bad idea.

The writer could have said, "Each student writes his or her thoughts in his or her school diary", but that's awkward.

I don't think there's a neat, unambiguous, non-awkward way to write this sentence in a gender-neutral fashion. Happy to hear if someone has a suggestion.

I think that in the passage you quoted, the clue to understanding that they all write in the same diary is the time when they do it — each morning. If each of the students had a personal school diary, one might write in it whenever he or she wished. Then the sentence might read:

Every day they write about their thoughts and feelings in their school diaries.

The way it's written does convey a feeling that there is indeed a communal diary. Only because just about everything else they have is written in plural: emails, texts, phones. To keep the same pattern - the reasons for singular/plural have been discussed in other answers - diaries needs to be plural.

It is more intuitive that there will be many diaries, but probably only one each, than one diary between them - physically difficult to get everyone to write something in - so diaries is a better fit.

I wonder if there is a parallel with a sentence like:

Every day the suburban commuters take the train to work.

(they) take the trains to work

Not the answer you're looking for? Browse other questions tagged nouns singular-vs-plural singular-they .

30
What's wrong with "Most people in the country would like to own their house some day."?
8
Is it grammatically correct: no one raised their hand?
7
Does "The Vampire Diaries" mean "the diaries of the vampire"?
7
what is this grammar? A plural noun with a singular object

3
Is the use of 'the Italian' for people from Italy acceptable?
3
Phone or phones
6
They love their f***ing family
2
Plural or singular when using multiple subject
2
When exactly do we have to use the distributive plural?
0
Singular vs. plural in the object of this sentence
0
“granting high school basketball recruits permission to sign with agents on July 1 entering their senior years” meaning
1
Which one is grammatically right? : " Population" or "Populations"