Is using "for too much" correct in this case?

Writing thoughts in English, I was compelled to put:

He is reacting to this for too much.

Even though it seemed natural to me to use for too much (based on my experience of learning English), I was not completely sure whether I should use too much or for too much.

Research done before asking:
1. Google gave no relevant informaiton in response to "too much" and "for too much" and "too much" grammar
2. SkELL has 23 entries of for too much, although it seems that for in these cases belongs not to too much. 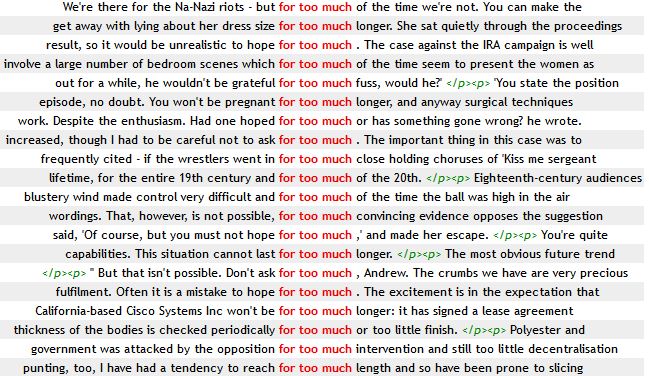 As you say, in all of your corpus examples the object of for is not too much but the noun (either explicit, or implicitly 'fused' with much when much is employed as a pronoun) which adjectival/quantifier too much modifies.

You are seeking to use too much as an adverbial modifying is reacting; in this use there is no call for a preposition. You want to say:

He is reacting to this too much.

The use of for here may have been suggested to you by an imprecise memory of far too much, in which far is employed as an adverb modifying too much.

Note, however, that we do not ordinarily measure the intensity of a reaction as a quantity, which much implies. The most common measure is "strength":

He is reacting to this too strongly or too weakly.

He is reacting to this for too much.

That's wrong, since "for too much" describes something, and that sentence doesn't. It can be rewritten, "He is reacting to this much (or way or far) too much."

Not the answer you're looking for? Browse other questions tagged grammaticality formal-language .

3
Is using 'yourselves' in this sentence grammatically correct?
2
Is "very much" correct in these sentences?
1
Is using the genitive case recursively a correct usage?
0
Is "Had have" form strange for you too?
4
How to use 'Give it a look/Give a look (to)'?
0
Is this sentence correct grammatically? (using article)
1
Using too many articles
0
"If this is too much for you"
0
Is it correct to avoid using apostrophe in this situation?