You earn money. You also steal or launder money. Do you also “grab” the money?

Literally as in the title. You earn money, right? You earn money by working. You can also steal money from a bank. So do you also "grab" money to mean that you steal money? Although collocation dictionaries that I have looked up do not list "grab money", I have seen it in song titles.

"Get the Girl, Grab the Money and Run" (A hip hop song)

It sounds like having a strong negative connotation. So I looked up some pictures and here is one I have got: 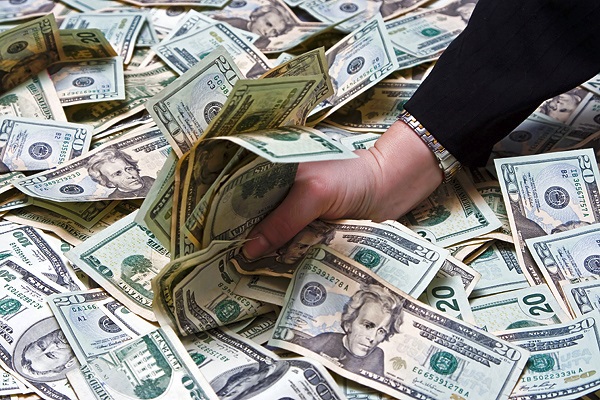 I think at this point to "grab the money" means the action of stealing it but I am really not sure.

So to tidy up, my question is of two parts:

"Grab the money" is perfectly understandable, the often used phrase is

take the money and run

which has been used as a song and movie title.

means to "seize" money, which may be in different forms. It may literally mean "take a handful of money", it can also be used figuratively as in

in the same way that one can "grab" an opportunity

Opportunity only knocks once, you have to grab it while you can.

The use of "grabbing" implies a quick action, similar to "snatching".

I grabbed a cup of coffee before heading for the bus.
We grabbed a quick lunch between meetings.

As with many idioms, much depends on context. "Grab the money" means to get money by whatever means are most effective and expedient. Sometimes this can be illegal, sometimes just unethical, and sometimes perfectly fine. A musician might record a song, get as much money as possible for that song, and then get out of the business. A software developer might make a killer app, sell it to investors for a lot of money, and get out to do something else.

Of course, a thief might try to get one big "score" -- a house with a lot of valuables, or a poorly-guarded bank -- in order to "grab the money" and get out. An unethical person might set up a "pyramid scheme", "hook" a bunch of gullible investors, and disappear with their cash.

The common trait is intention -- if you are in something to "grab the money", you don't plan to spend a lot of time doing it. You want a quick payout.

It's negative if you value people who work hard and stick to something, who like to see things through. Other people, who like the idea of fast cash, might see it as a positive.

To grab something simply means to 'grasp or seize suddenly and roughly', and it can be used in many different contexts. For example

However, in context, it can be used to describe the act of seizing money suddenly, and there's even a particular form of burglary - a smash and grab - that involves smashing a barrier, usually a display window in a shop or a showcase, grabbing valuables, and then making a quick getaway, without concern for setting off alarms or creating noise.

In the context of the song lyrics, I'm not so sure it is describing the act of stealing though.

Today's just another day for me to get paid.

And retreat for the shade.

Find me a top bread freak to get laid.

Back when I'm masquerade.

Then I'm on the the next one.

"Yeah. Grab the money and run.

You gotta, get the girl, grab the money, and run.

You gotta, get the girl, grab the money, and run.

you gotta, get the girl, grab the money

'grab the money and run' can also simply mean get paid, and get out which sounds more fitting of the lyrics above.

As to why it's not in the dictionary? The word 'grab' has a broad scope - it can be used to describe the act of grasping anything. An element of luck would be involved in finding a dictionary that contained the exact example of 'grab' that you are looking for.

Not the answer you're looking for? Browse other questions tagged word-meaning collocations or ask your own question.