When you don't understand a joke right away

In my native language we have lots of ways (some of them very funny) of saying that you, or someone else didn't understand a joke right away. That is, he/she needed some time to figure it out.

I wonder if there's any idiomatic way of expressing that in English.

...are very likely to be assumed to be in reference to a joke that wasn't understood.

The first phrase that comes to mind is 'The penny dropped'. As with jwpat7's suggestion, this phrase is not limited to understanding a joke, but is commonly used in that sense.

Particularly in a situation where a lot of people have been laughing at a joke and I finally understand it, I would say:

You may hear over his/her head.

That one went over his head.

While it applies more to someone who is not familiar enough with English or the appropriate cultural/topical reference to get the joke, rather than someone who is just slow on the uptake, it's just as likely to happen in an ELL setting as the latter.

It can also be expressed by simply waving your hand over your head and making an apologetic expression.

The phrase slow on the uptake, often is so used. As seen from the examples at Collins Dictionary, it does not specifically refer to being slow to understand a joke, but I've often heard it used that way.

The phrase "late to the punchline" is idiomatic, and always refers to this situation.

If your auditory audience are active Web users, they may be aware about an Internet meme, Slowpoke. 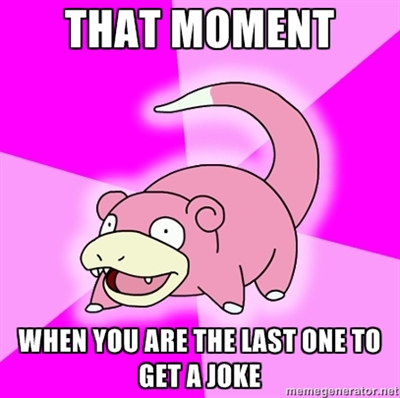 There's also a Pokémon with the same name.

Hence, this term is often used on Internet boards to denote a person who's too slow to get a joke.

By the way, it can be also used if someone is posting an old joke that was popular a while ago, and everyone already knows it.

Not the answer you're looking for? Browse other questions tagged word-request idioms jokes or ask your own question.

-1
What does “thank you for getting it” mean in daily English?
1
What's the meaning of “get behind”?

191
How does the “Dalai Lama walks into a pizza shop…” joke work?
6
To look “forced”
3
A person that you share the neighborhood with
0
When someone's behavor is admirable or… in your view
1
When ads are unecessary for buying a product because you already know the product yourself
1
An obvious model/example/type of someone or something
0
When someone acts obstinately / stubbornly towards you