When you want to ask someone to maintain their class

Please imagine that you take a friend (a guy) to meet a group of your friends at a party. The group and the guy are have never met one another and know nothing about one another. The guy starts clowning around out of the blue and you have no idea why he is acting like that. You feel shy in front of your group of friends and wish to let the guy know that you feel uncomfortable with his actions. You wish to tell him to not act foolishly and present the appearance of a low-class guy in front of your friends. In my mother language we may use any of the sentences below. I don't know if there are some equivalents in AmE to convey similar messages, or if they all work in English. I would appreciate it if someone could let me know if there is a natural sentence from among my suggested examples I could use, or if not please tell me what an AmE speaker would say instead:

I'm not sure that in modern usage of english that we refer to class directly in this way - people tend to reference the attributes that go with being in an upper-class environment, rather than referring to the class itself.

For example, in the scenario you have provided, one might say:

...or variations thereof, to request that a friend act in a manner more appropriate to the social situation.

You can also take the opposite view, for example:

...but even then, the reference is indirect.

I don’t know anyone who would say, “Maintain your class.” The word class in this context doesn’t usually get a personal possessive pronoun such as my or your. Instead, we’d use a determiner like some:

Other good suggestions have been given in other answers – I particularly like “Show some manners.” I think “Don’t be crass” is good, too, although I might add a so in a sentence like that:

Don’t be so crass.

You could also warn the other person calmly:

You’re making a fool of yourself.

or rebuke them outright:

Don’t make such a fool of yourself.

Don’t be such an ass.

Even though (social) class is a concept in American English, it tends to not be used commonly because the American culture tends to pretend social classes are either not important or don't exist (due to the equality of all people that is assumed by the culture).

So if I had to use one of your answers, I would use the last one (Don't act like a low-class person), but I would replace 'low class person' with 'a word like 'crass', 'crude' or 'unrefined' and say one of the following:

Another, much more common sentence that conveys the same meaning is:

The sentence above implies that only a child (who doesn't know better) would act in this way.

The guy starts clowning around out of the blue and you have no idea why he is acting like that.

When someone is obviously in high spirits, and enjoying themselves I might leave well alone. If however the person's behaviour is really inappropriate, I might take them to one side and hiss... 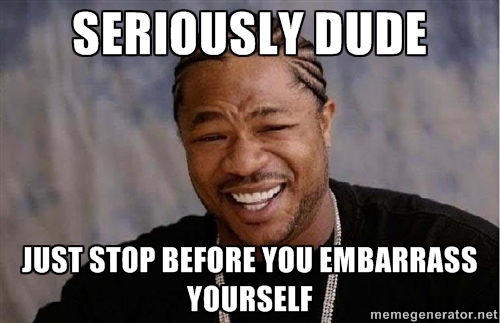 For something more direct, and "rural" then just ask

Absolutely no one native to the UK using BrE would ever make a remark comparing someone's behaviour to a person from another 'class' unless, that is, they are themselves pretending to some degree of social 'refinement' (or snobbery, in fact). In the circumstances you describe, depending on what kind of person you are, you might take your friend on one side and ask what on earth is wrong with him that he's behaving like an idiot and embarrassing himself, or you might simply say 'don't be such a jerk/idiot/twit', or possibly 'what did you take before you got here', or 'what are you on', but never, ever would any such criticism include any reference to social class.

As many have stated we don't generally refer to "class" directly (in the U.S.). It's always abstracted via the actual name of the group. As if by doing so we remove the group's relationship to class, which of course is complete nonsense.

We would say it like this, "Stop acting like a [insert name of group that your high class friends would be comfortable disparaging or that they commonly disparage]."

The answer can be found in the prejudices of your "high class" friends.

I'm confused why everyone is saying this expression doesn't exist. It does, and it's idiomatic:

Not the answer you're looking for? Browse other questions tagged sentence-construction sentence-structure sentence-choice .

0
Do I need "as well" in the end of this sentence?
1
When you are going to console someone
0
Someone's / something's privilege against someone / something else
1
How to ask someone to continue the play when they have stopped playing for some reasons like thinking or looking at their phones?
1
When you want to ensure someone that what they are looking for has not been lost and it is right here and you'll find it
1
When you cut off all your ways back
1
When your appetite makes you feel that you want to eat
0
When you don't want eat food
0
How to inform someone who has bad breath from eating garlic