A:I assume you know about the latest goings-on with Hessington oil.

B:I wouldn't be much of a partner if I didn't.

These are lines cited from Suits. 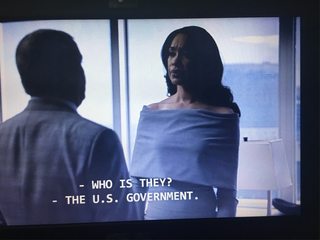 This is an example of the use-mention distinction. In the sentence "Who is they [sic].", "they" isn't being used as a pronoun, but instead is being used a word. That is, it's referring back to the use of the word "they" in the previous sentence ("Now they've decided to take on Ava Hessington personally.")

Notice in that sentence by A the "they" takes the plural form of the verb ("they are"/"they're"). This is always the case with "they" when it's used as a pronoun; it's always gramatically plural, even when it's used to refer to a single person. (Which, despite moaning by some pedants, is a perfectly valid English construct.)

In the sentence by B ("Who is they?"), the "they" isn't being used as a pronoun, but is being used to refer to the word "they" that was used by A in the previous sentence. The convention in English is that when you have this sort of "mention" case - where you use a word as a word as opposed to using it for its meaning - you should place that word in quotes or italics. So the closed captioner should really have rendered it as

The fact that they didn't is either due to limitations of the closed captioning system (for example an inability of the system they were using to represent quotes or italics), or simply because the captioner wasn't aware it was needed.

Note that the quotes/italics here aren't being used as "scare quotes" or as some sort of marking of incorrect usage, but as a literal quote of the word itself. As such, the speaker wouldn't actually make an air quote gesture, but probably would subtly emphasize the "they", either by saying it in a slightly different tone or pausing slightly before saying it.

Short Answer: Because Person B is referring back to Person A's sentence.

A: I assume you know about the latest goings-on with Hessington oil.
B: I wouldn't be much of a partner if I didn't.
A: Now they've decided to take on Ava Hessington personally.
B: Who is [the] 'they' [in your sentence]?
A: The U.S. government.

I assume that, as @Mari-LouA said, that they would be italicized or enclosed in air-quotes. So, considering this, the question is grammatically correct. This means that they is considered as an object and then it takes the 3rd singular form of the verb to be in the question.

This is common to be found in literature, in order to emphasize the fact that speaker B doesn't know anything of the people (they) speaker A is talking about.

In short, speaker B is referring back to speaker A's sentence.

In my earlier comments I mentioned

Typically the pronoun they, in this instance, would be italicised, to show emphasis in speech. Sometimes scare quotes are used instead. In the actual episode, did the speaker use air quotes by any chance?

When the OP confirmed that italics were not used, and the actor did not do air quotes, I replied:

No, I wouldn't expect subtitles to go into the trouble of using scare quotes or italics. I suspect Speaker B stressed they and gave a quizzical look

scare quotes
Quotation marks placed round a word or phrase to draw attention to an unusual or arguably inaccurate use.

So, if we look at the first line cited by the OP we see that the name of an organisation is used, Hessington Oil (I've capitalised Oil because it is part of a proper noun). In American English — and Suits is an American TV series — organisations and companies are often used in the singular. For example,

It could be that speaker B believes that "they" refers to a company or an organisation, and as a result uses the singular verb in: “Who is they?” Who "they" is, might also refer to a person, male or female, in which case the verb is singular.

It's also worth noting that the subject in the question is who, which is typically used for people and organisations, not for words. If the speaker had wanted to know about a word they could have asked: “What do you mean by they?”

Until we learned the answer, it was unclear whether the subject was plural or singular. The singular they is a prominent feature in the English language, it is used in place of he/she and it is frequently heard in speech.

Not the answer you're looking for? Browse other questions tagged auxiliary-verbs singular-they .

11
Is the article "a" justified in "they are wearing a cape"
2
When matrix clause is past tense and its subordinate clause uses 'will'
0
"They are never" or "They never"?
1
It is correct to use the word "they" here?
1
they are a traitor or they are traitors?
1
"They" instead of "he or she"
1
Singular they and each - is it ambiguous?
10
Are some schools teaching "They" as genderless singular?
0
Who did have vs who had