From behind - preposition or adverb?

Please have a look at the sentence below:

A car came up FROM BEHIND and overtook me.

I have done some research and came to the conclusion (whether correct or not) that 'behind' in this sentence is a prepositional adverb, which is an adverb that functions like a preposition, with the main difference being that it doesn't have an object (pronoun or noun). However, what confuses me is that, if the above is true, then it would mean that 'from', which is definitely a preposition before 'behind', doesn't have an proper object. Could 'From behind' be an adverbial phrase? Please explain in detail.

(The following analysis is adapted from Huddleston and Pullum, The Cambridge Grammar of the English Language, 2002, Ch. 7, 'Prepositions and Preposition Phrases').

Your sentence, then, may be understood as embedding two PP complementing came; the first PP is the bare Pi up, and the second PP is headed by from and takes a third PP, the Pi behind, as its object. 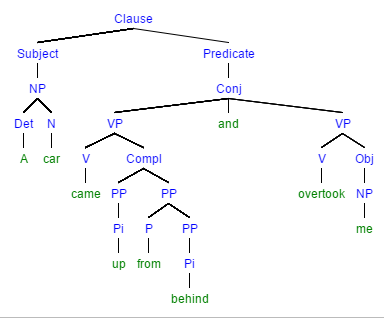 Not the answer you're looking for? Browse other questions tagged prepositions grammaticality adverbs .

0
various usages of the adverb not
6
"While you're *at* it" - Why *at*?
8
"nearby" (close by) as an adjective, a preposition, or an adverb
1
Passed down/handed down by/from
0
The use of preposition with time
2
Does "not" modify main verb or adverb?
0
Are "out, from, for, etc" adverbs or preps? Eg, "The noise came from under the sink", "The shoes are for in the house", "jump out of the plane"?
1
Participle clause after subordinate clause (adverbial clause with its own participle clause)