"Ball" and "bowl" do they really sound the same?

To my non-native ears, they always do even though the dictionary says otherwise. Do you say the two words in the same way in your speech?

I understand and recognize the difference between the two. It's just the difference seems to vanish in fast-paced native speech. I'm asking about whether native speakers ignore the somewhat subtle difference in their casual fast-paced conversations, and produce the two words/sounds in the same way. I wanted to confirm whether that was true or I was just hearing things.

My native language is Arabic. I can tell whether the speaker's accent is American, British, Canadian, etc., but honestly, both Brits and Americans gave me the same experience. I can determine from context which word is meant. Because my ears are not well-trained to hear a British accent, the difference is almost impossible for me to grasp in British casual fast-paced speech.

English has a lot more vowels than most languages, so most learners need to re-train their ears to recognize the additional vowels. In both British English and American English, the difference between ball and bowl is small, but significant. It is easy for native speakers to recognize because their ears are trained to do so.

In ball, the vowel is a long vowel: that means that it sounds the same all the way through. The same long vowel occurs in law- /lɔː/ in BrE and /lɑː/ in AmE.

In bowl, the vowel is a diphthong, which means that there is a glide between two different sounds. The same diphthong occurs in low- /ləʊ/ in BrE and /loʊ/ in AmE.

You can see the difference clearly in this spectrogram of a British English speaker saying ball and bowl. In the first word, ball, the long vowel is the same all the way through. In the second word, bowl, the diphthong sound changes, starting at the red cursor line. 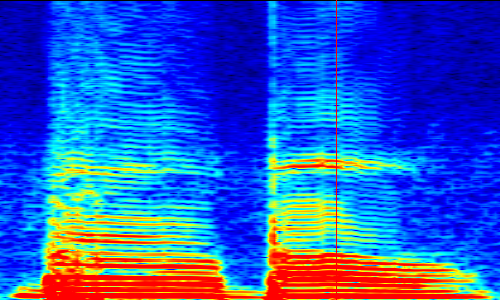 Regarding your comment about casual, fast-paced conversations: when people speak casually, and when they speak quickly, the parts that lose clarity are the function words: the little words that provide the structure for the language.

Take the word and, for example: the strong form is /ænd/, but most of the time we use the weak form /ənd/. As speech gets progressively faster and/or more casual, it becomes /ən/ and finally /n/.

Meanwhile, the important words- nouns like ball and bowl- are usually stressed, and don't soften up in the same way. The central vowel in a stressed word is about as protected as you can get.

You might get some de-stressing if the noun is preceded by an adjective (the red ball) or when it's part of a compound noun (a furball), and this might weaken the clarity a little, but not, in my opinion, enough to make it impossible to discriminate for a native listener with the same accent.

I'm non-native speaker too. I think ear-training is important. In America English, there is obvious difference between [ɔ] sound and [o] sound. The [o] sound has a hidden [w] sound ending, sounds like "Oh", produce it by bringing your lips forward and mouth from opening to closing. The [ɔ] sound sounds like "Awe", produce it by keeping your mouth round.

They are definitely different. My wife (a native Mandarin speaker) has said “ball” for “bowl” in contexts where it was confusing, and initally learned some words wrong because she didn’t hear it correctly (e.g. a “light ball”).

I disagree with the ascessment that they are so similar that native (American English) speakers can confuse them in listening. “oh” is said with rounded lips, and the sound in “ball/hall/call” is not. Does “on“ (put on a hat) and “won” (she won the contest) sound or spoken the same to you? (Other readers: if so, which accent is that?)

As an illustration, I worked with a person who grew up in New Jersey. I heard him try to teach my sister how to bowl (at a bowling alley). Roll, ball and bowl all ended in what sounded like "...owl". I can see how that could be very confusing to someone from another language basis.

Not the answer you're looking for? Browse other questions tagged pronunciation phonetics .

14
Are "mist" and "missed" really pronounced exactly the same in English?
3
What is the difference between the pronunciation of "a" and "e" in a closed syllable?
1
Do "fat" and "that" sound the same in the Cockney Accent?
0
Do "al(t)" and "aul" sound the same?
0
Does “lɪən” really sound like “lyən”?
2
Why are double consonant ‘r’ sounds transcribed as a single phonetic sound
0
How to pronounce bet, bat, bite and but correctly?
1
How to pronounce "walk" and "work" unambiguously
1
Are /s/ and /z/ really distinguishable at the end of a word?