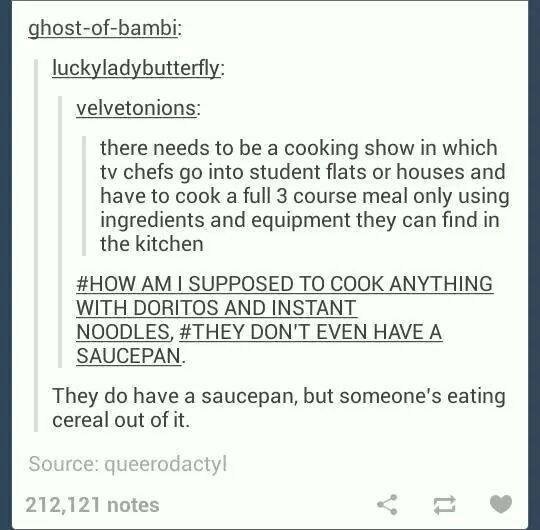 I don't get the cereal part of this joke.

For example, college students are commonly depicted as living off ramen noodles, or living in squalor of sorts, often eating and drinking out of the first container that comes to hand, rather than wash dishes and tidy up.

The tweet you quoted combines both of these elements - the original joke refers to the first image - a cooking show in a student's apartment, where the chefs find they only have instant noodles to work with. The second joke refers to the second element, where the chefs find they have one saucepan to cook with, but somebody is eating cereal out of it rather than wash dishes to use.

Not the answer you're looking for? Browse other questions tagged meaning meaning-in-context word-meaning phrase-meaning jokes or ask your own question.

5
“Going to branch left minus” joke
3
What's "wheelchair" in a vegetable?
16
A joke about owls playing pool
2
What's the joke with a drain cleaner?
3
Mario 1-up'd joke
2
'Taken' joke on Twitter
2
Where is the joke in "prime minister"?
22
What's the hidden joke/meaning behind "Don't drink and park - accidents cause people"?