How to distinguish following two of "rather" meanings in sentence?

How to know the word "rather" is meaning to some degree or excessively in a sentence?

They seem make sense to understand as any one of those two meanings in some examples below.

It's rather(meaning to some degree or excessively ?) expensive.

I rather(meaning to some degree or excessively ?) think he was telling the truth.

And how to use rather when I want to express exactly "to some degree" or "excessively" in a sentence? 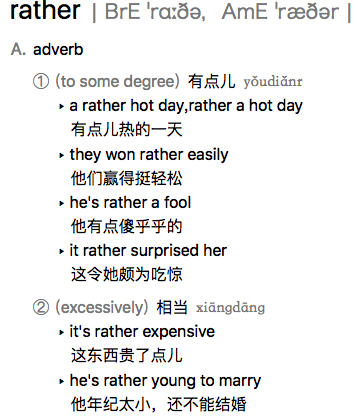 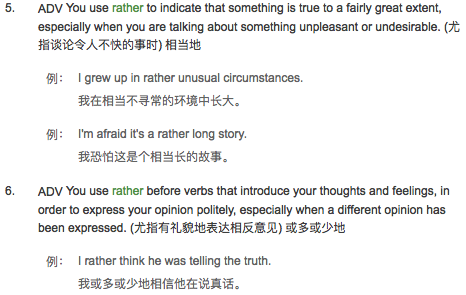 Looking at the first dictionary entry, I don't accept their distinction between definitions 1 and 2. As far as I'm concerned, the two examples for the second definition both mean to some degree, which matches the first definition. If you wanted to make it clear that you meant excessively, you would have to add the word too:

Looking at the second dictionary entry, the use of rather before an opinion verb merely means that you hold the opinion to some degree, and one could do this in order to be polite. It does not, however, imply that you disagree with what somebody else said.

For examples where you are using rather to contrast two differing views, see the MORE EXACTLY and PREFERENCE section of the Cambridge Dictionary definition.

Not the answer you're looking for? Browse other questions tagged word-usage word-meaning word-order word-difference or ask your own question.

1
Use of "always" and "am"
0
Amid/Amidst as In the middle of
0
"Line up", "Hook up" and "Fix up"
0
Occurrence vs Happening
1
How is an academic course structured in its content (USA)?
0
How do natives understand a word with multiple meanings?
0
any semblance of a DOJ investigation