“Dick” a name or manhood organ

This question might be unorthodox but please help me understand it. I know many people named dick, like Dick Cheney former vice president of USA. And I head many people insulting each other with the same word. Are they really the same?(pronunciation and spelling)

Is it still a popular name? Is it possible that it had another meaning in the old days?

If not why would anyone name his/her kid something like that?

Same pronunciation, same spelling. Their name is not actually "Dick", "Dick" is an abbreviation of the name:

Which is a perfectly ordinary person's name. English is full of these somewhat nonsensical shortenings:

and so and so forth, so his name is actually "Richard Cheney", its just that his casual acquaintances have taken to calling him "Dick" like we call former president "William Clinton" "Bill Clinton".

However, due to the slang you mentioned, I think very few people these days would accept their name being shortened like that, and insist on "Richard".

I was called "Dick" or "Dickie" until I got to high school (1968). There was kidding about it, but not in a major way. Still I ended having people call me "Richard". Then as a sophomore a girl took me aside and said that "Richard" sounded way too formal. She suggested "Rich" or "Rick" instead.

Other names with the same connotation include Peter and Johnson. A "polite" word often used is member. Out of curiosity, I checked with the Ngram viewer: 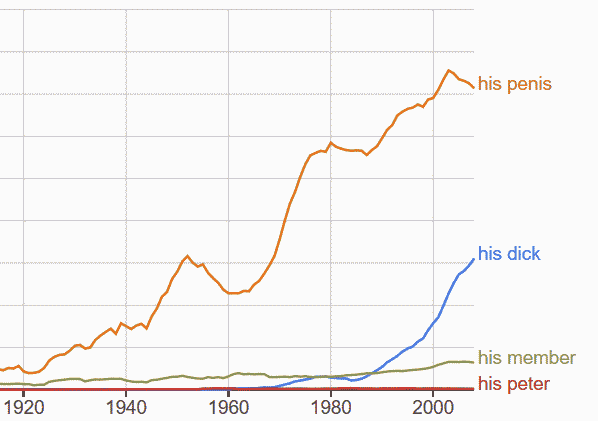 interactive Ngram viewer (note that it is normally case-sensitive)

It turned out that "his johnson" was just crowding "his peter" at the bottom, so I left it out. My concept about Peter was wrong. I had thought it had been the popular substitute term, and that the graph would show the word peter fall as dick rose. (Sheesh! 😱 I know how that sounds, but I don't know how else to say it.)

After posting, it occurred to me that I should have included "his manhood", as the OP originally did. You can check for yourself via the link below the image. It turns out that in 2008, its usage fell between "his dick" and "his penis". But from 1820 on, it dominated "his penis" and did not fall below until about 1950. I'm not replacing the original plot, though, because "his manhood" has other common meanings, such as, "upon reaching his manhood". I suspect it was that context which allowed it to dominate the plot for so long.

Yeah, avoid using the name "Dick". "Rich" and "Rick" are both great.

Dick used to be a popular nickname for Richard, as in the case of Dick Cheney.

Very rarely nowadays do you hear people going by it, as the name is more associated with slang for, yes, a man's penis (or more colloquially, a person who's a big jerk!).

A quick check of the Oxford American English dictionary shows that the "manhood" sense "dates from the late 18th cent." Possibly "Dick" as a nickname for Richard survived despite this because for a long time, saying the word was more associated with a person rather than a penis.

4
Is 'Hi <last name>' a correct salutation?
3
Which introduction is preferred: “Myself [NAME]” or “I'm [NAME]”?
1
How did Regex get its name?
1
“Some Name Art” or “Some Name Arts”?
0
How to correctly place “plaza” in a store name?
0
<Brag about> vs <Boast about>
0
About Asian ancestor worship, do we say “he is praying for his grandpa” or “he is worshipping his grandpa”?