Things you have (eat or drink) while drinking alcohol

Is there a word to describe things you eat or drink while consuming alcohol? We usually eat something like chips, cucumbers, olives etc while drinking especially with strong types of drinks like vodka (mostly because it makes it easier to drink) or when we'd like to take a while drinking and probably getting drunk at the end.

Intending to have a wild drunk night, a couple of pals get together with a bottle of strong alcoholic drink in the woods. Joe takes out glasses and the bottle and says,

Or someone pour you some liquor. You drink a bit and say,

Wow it's a bit strong! Have you got some [word]? Anything will do.

I'm not sure we have a direct analog, for food we only consume with alcohol, but the word

would apply. They mean small food items to be consumed, not as a meal. Chips, cucumbers, and olives would definitely apply.

Serving a similar purpose, people frequently mix other liquids in with hard alcohol to make cocktails that taste better. We would call those

And sometimes people have a drink on hand that they drink after consuming hard alcohol to get rid of the lingering taste, and that is what we would call a

In the U.S. (and Canada), appetizers, referring to anything served before a meal, is the most common term for hors d'oeuvres. Light snacks served outside of the context of a meal are called hors d'oeuvres (with the English-language pluralization). LINK

It doesn't have to be served with alcohol.

Bar Food, appetizers, hors d'oeuvres, nibbles, snacks, finger foods, munchies, bar nuts -- any of these can be used, including specifics. We're having 'crawfish and beer', or 'wine and cheese'.

There is also a synonym for snacks, munchies, in AmE.

Dude, don't tell me you forgot the munchies.

The word can also mean a sudden desire eat, as with the use of marijuana.

Consider drunk food. It's more colloquial than a "real" definition, but I think it fits. Here's a usage from an article (23 best drunk foods):

Drunk food is what you [eat] ... in the misguided hope that it’ll absorb whatever alcohol hasn’t yet made it into your blood stream.

(You can also, of course, eat the food during a night of drinkingSorry there's not a more "official" source, it's pretty colloquial (USA), but it may fit your use.)

No, there is no good English equivalent for закуска. This is probably because the drinking culture in English-speaking countries is very different from that of Russia. There is typically much less food involved.

In the UK, it depends how posh you are.

If you have a cook or use outside caterers, you will have them make canapes: at a pinch, you could buy some ready-made from Marks and Spencer's. 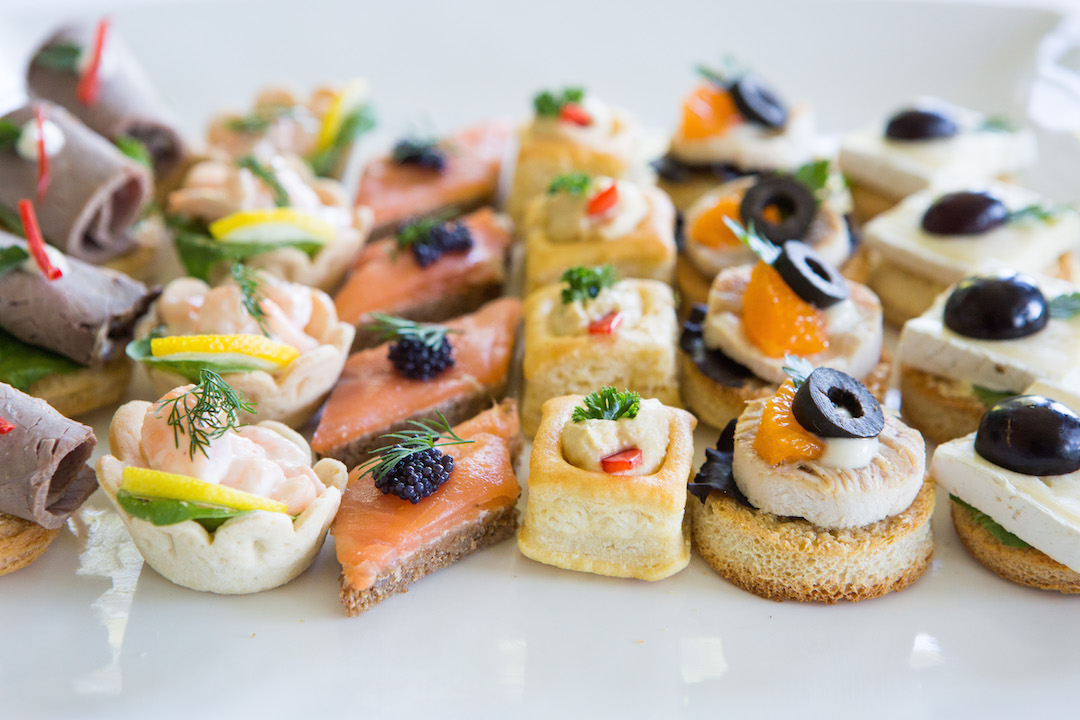 Ordinary people have nibbles: a pack of peanuts, rice crackers or crisps bought from a supermarket and poured into a bowl.

OK Jack. What you waiting for? Go get the finger foods to go with the beer. Come on! What is it?... Oh, You didn't forget to get the bar snacks. All you had to do was to drop by a supermarket and get some party appetizers.

Finger foods describes the kind of foods you're discussing, which you eat with your fingers.

If someone said bar snacks to me, I'd be thinking of salted peanuts. That's the thing that I've seen set out at a bar to encourage people to drink more. Bar food would bring to mind a particularly greasy meal, e.g. chicken wings, fries, or nachos. Party snacks would include things like chips. Sliced cucumber or olives might make it as finger foods. Hors d'ouevres reads fancier to me, e.g. stuffed olives, bacon-wrapped oysters, or canapes. I'd expect hors d'ouevres to come from a caterer or a serious cook.

Wow it's a bit strong! Have you got some finger foods? Anything will do.

Note that if you mean pickled cucumbers rather than sliced cucumbers, we'd usually just call those pickles. When I hear cucumbers, I expect fresh cucumbers. I mention that because I would think pickles would fit better as an alternative to olives or chips, which tend to be salty.