How to understand "things flying through the air experience drag because of the momentum of the air they're shoving out of the way"?

In the article Weightless Arrow from the What If? book, I meet this sentence:

That means things flying through the air experience drag because of the momentum of the air they're shoving out of the way - not from cohesion between air molecules.

How should I understand the sentence before the dash? Intuitively, I understand that it's the air which shoving out of the way dragging the things. But since only things flying through the air is in plural form, then they should be a substitution of it. With that in mind, I break down the logic of the sentence:

Or, to modify the original sentence:

That means things flying through the air experience drag because of the momentum of the air [created when] they're shoving out of [its] way - not from cohesion between air molecules. 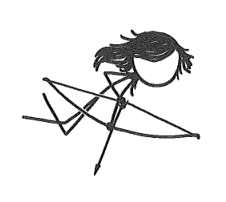 In the first place, showing here is certainly a typo for shoving.

Things flying through the air shove some of the air out of the way. This air possesses momentum, and it is that momentum (rather than the cohesion between the air molecules) which causes the drag which the flying things experience.

Sorry, former physics geek here, have to pedantically chime in. The statement, as it's worded, is technically wrong. For an object moving through the air, the proper word for what the object is encountering is the air molecules' inertia, not their momentum.

If you're measuring drag in a wind tunnel, with moving air striking a fixed object, then the air molecules could be said to have momentum (although applying it to an ill-defined 'object' like an entire moving air current would still be an unusual usage, because momentum is mass times velocity. What's the mass of an air current within a larger atmosphere? 'Momentum' is usually meant more to apply to discrete objects moving as a unified whole.)

BTW, considerations of word choice aside, even substituting 'inertia' for 'momentum', the statement still isn't quite right, it's an oversimplification. Per http://physics.info/drag/ inertia is only partially responsible for drag. There are other factors involved also.

Since the question asks, “How should I understand the sentence?”, I’ll add another word of physics explanation.  The book is saying that things flying through the air are a little like a bowling ball hitting pins:

Since the pins have inertia — and they have zero momentum — some of the ball’s momentum is transferred to the pins when they start moving out of the way.  Therefore, the ball slows down a little.  Or, to paraphrase the original sentence,

The bowling ball experiences drag/deceleration because of the momentum [that is transferred to] the pins that it (the ball) is shoving out of the way.

This is partly a physics question as well as an English question. As Galileo explained, motion is relative. If an object is moving through the air, it's equally valid to consider the object as still and the air as rushing past it.

If we consider the air to be rushing past it, each particle of air has a velocity. Multiplying the velocity by the mass of the air particle gives momentum. Because the air has momentum it forcefully pushes the object backwards. From the other point of view that means it slows it down.

Not the answer you're looking for? Browse other questions tagged sentence-construction sentence-structure .