How to interprete a vector which “pointed down the middle of the data”?

In this tutorial (line three) it is hard for me to interpret what "point down the middle of the data" means. I know from the tutorial the mentioned vector (doted line in the following plot) is the one of which the slope is positive (the red arrow points to). Intuitively the line "point down" (from the left to the right) is the other vector (doted line whose slope is negative in the plot). 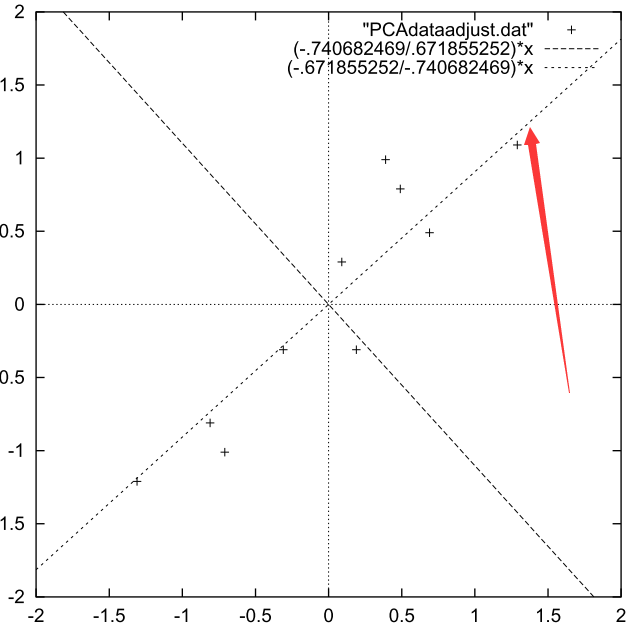 Have I made a mistake?

In mathematics a vector is a quantity with both length and direction. A 2d vector can be represented by an arrow, so a vector can be said to "point" in a particular direction

In a scatter graph which has strong correlation, like the one above, the data points are scattered close to a line (the dotted line running from bottom left to top right). It should be possible to imagine an arrow pointing along the line. There are various ways to derive these vectors. Least squares regression line is most common, but another way is to imagine an ellipse that goes around the data points. Then vectors from the centre of the ellipse in the directions of the long and short axis of the ellipse can be defined. This can be formalised in terms of Eigenvectors of the covariant matrix. These vector point in the direction of the line of best fit, and so would be said to "point down the middle of the data". (any further maths would be off topic).

Perhaps you are confused about the use of "down" instead of "up". We normally used down if we mean "away from ourselves". Hence we say "walk down the road" "I'm going down-town".

(by the way: spelling is "dotted")

Not the answer you're looking for? Browse other questions tagged meaning-in-context mathematics or ask your own question.

4
What does down the hall mean?
1
How should I mention that I have collected the data set used in my research myself
0
How do I call the operands in a modulo operation?
5
What is the meaning of “cow in the middle”?
1
Meaning of “and yet” in the middle of this sentence
0
Where is the of “middle upper arm”
1
How to understand “bobbed out into the middle of the lake”?
1
What is the meaning of Data Stash?
1
What does the “down the block” mean?