A sentence in Sense and Sensibility

When I am reading sense and sensibility, this sentence beats me.

1) why should three letters of "HER" are all capital?

2) As to the latter sentence, "two maids and a man" is the subject, but what is predicate? I think "with whom... Norland" is a clause. 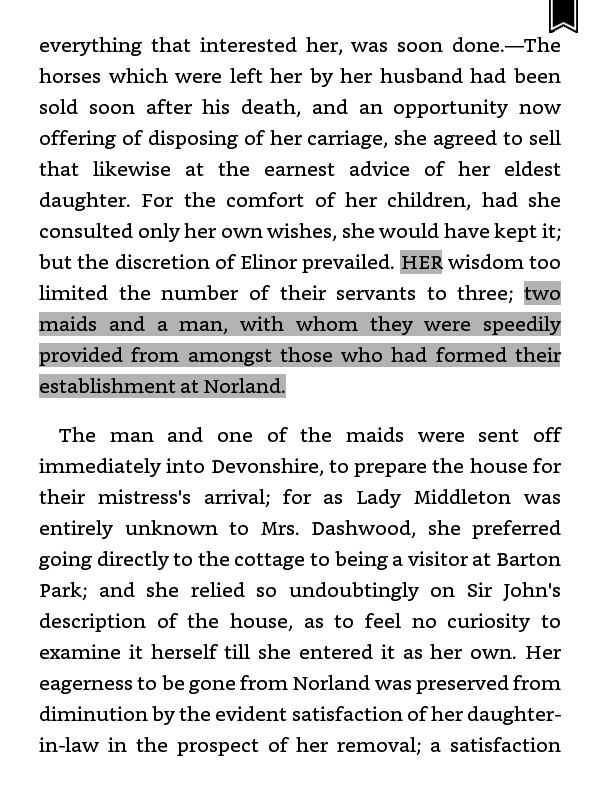 The Reason for the CAPS

In this exchange, there is a difference of opinion between the mother, Mrs. Dashwood, and the practical and prudent eldest daughter, Elinor, of which belongings they keep or dispose. The italics emphasizes a contrast to the previous sentence, "...the discretion of Elinor prevailed." But, if it had been up to Mrs. Dashwood, SHE would have done it differently.

The actual parsing of that sentence is difficult for me to explain in long hand. You're correct that "two maids and a man" is the subject. The predicate would be "were speedily provided." You also have the subject "they." The two subjects are connected by the prepositional phrase "with whom"; two subjects with the same verb.

I recommend this web based parsing app that will take short sentences and parse them with great explanations. I typed in an abbreviated form of the sentence and got this parsing (lots of fun):

"Two maids and a man, with whom they were speedily provided from those at Norland." 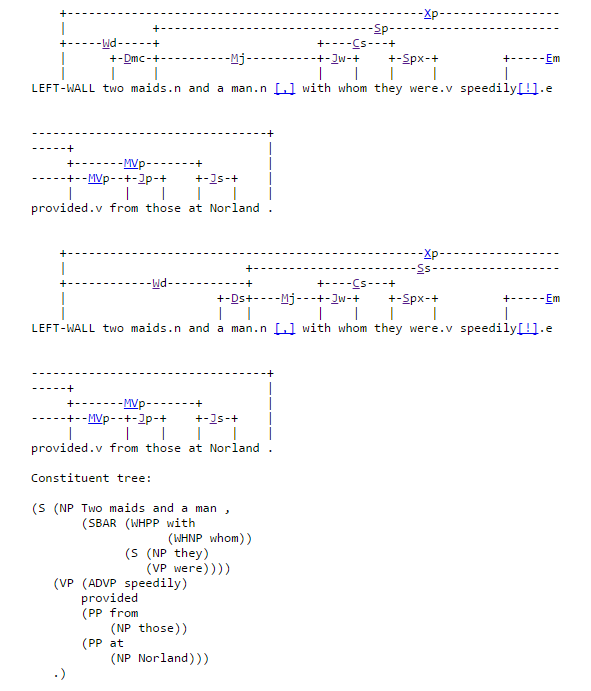 It means the "two maids and a man" came from the servant staff they previously had at Norland.

An "establishment" informally can be an organization, a company, a household, or a club. It generally just means a group of people with some associated activities and usually has a location. So if you had a house with your family and some servants they would be part of the establishment you had there.

Speedily provided here probably means they got them quickly.

Not the answer you're looking for? Browse other questions tagged meaning sentence-meaning or ask your own question.

1
What is different of a complement and a relative
0
Sentence-Meaning
0
Which sentence among the four makes sense?
2
Understanding a sentence from a dialog
0
How to understand the sentence “I can't make up or down out of any of it”?
3
“… a constant companion and housekeeper in his sister.” What does the “in” mean?
0
Is “divide into” in this sentence equivalent to “be divided by”?
1
Confused by a passage
2
Meaning of “pique” & “vanity” in this context?
1
Meaning of “Who should I say is calling?” + Grammar structure