I can't get my head around the slogan "men's style decision, too". It's for the fashion e-commerce company Zalando. I've twisted and turned the sentence, tried stressing different words but can't make any sense of it. I think it reads and sounds "ugly". What does it mean? Is it even correct English? 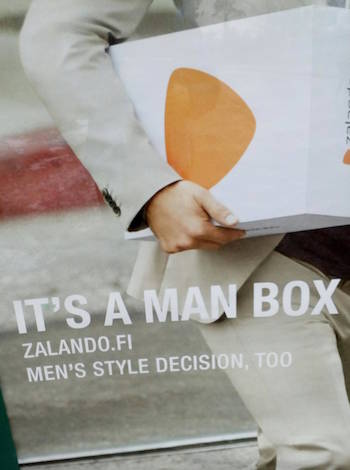 You could come up with an explanation for what it means, and people might look at it and say it makes sense. For that matter, you could come up with multiple explanations that all seem plausible. But I believe the slogan isn't actually an English phrase with a specific meaning. Rather, it is a very clever way to use English as a psychological mechanism for a marketing tool.

There are several things going on with that slogan. First, it is somewhat like an invented brand name. You are undoubtedly familiar with brand names that aren't real words, they are combinations of word fragments that sort of sound like a word. The fragments are associated with concepts the manufacturer wants you to think about in connection with the product.

Similarly, the key words in this slogan are associated with concepts they want you to connect with the product. Rather than word fragments joined into a single word, they are words seemingly connected in a phrase.

Words like "decision" also serve as a form of subliminal suggestion. People associate "decision" both with being in charge of making the decision (empowering; they can feel comfortable buying because it is their own choice), and the suggestion to make a purchase decision.

What is brilliant in the slogan is the use of something similar to cognitive dissonance. The human brain works efficiently when it is able to make sense of things and form associations and connections that all work together. When two ideas are in conflict, or something simply doesn't make sense when it apparently should, it actually creates a form of mental stress to motivate you to simplify things and make everything cohesive.

The slogan almost seems to make sense; if you just think about it enough, the meaning will come to you. That is like a mental hook, and your brain won't let it go. It keeps you thinking about the company and its products.

So the meaning of the slogan is anything you would like it to mean as long as you are thinking about the company and its products.