see title; mostly: what does h/t mean? (Google is awful at finding text with slashes and recommended to replace it for "hot", and ignores the slash when explicitly told to search for h/t)

Note that sending the bitset variable to std::cout prints the value of all the bits in the bitset.

Remember that the initialization value for a bitset is treated as binary, whereas the bitset functions use bit positions!

std::bitset also supports the standard bit operators (operator|, operator&, and operator^), so you can still use those if you wish (they can be useful when setting or querying multiple bits at once).

We recommend using std::bitset instead of doing all the bit operations manually, as bitset is more convenient and less error prone.

Source: 3.8a — Bit flags and bit masks
Just below the linked code, just above "bit masks". Use ctrl-f if you don't see it.

I found the following on Urban Dictionary.

So it sounds like the author is acknowledging the reader "Mr. D", giving him credit for something mentioned in the article, possibly the last line in that portion

We recommend using std::bitset instead of doing all the bit operations manually, as bitset is more convenient and less error prone.

By the way, hat tip refers to the following. From Wikipedia

A hat tip is an act of tipping or (especially in British English) doffing one's hat as a cultural expression of recognition, respect, gratitude, or simple salutation and acknowledgement between two persons. 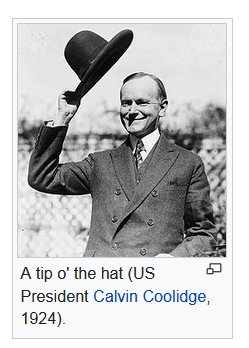 Not the answer you're looking for? Browse other questions tagged meaning-in-context abbreviations .