I want to form a sentence to describe this image. 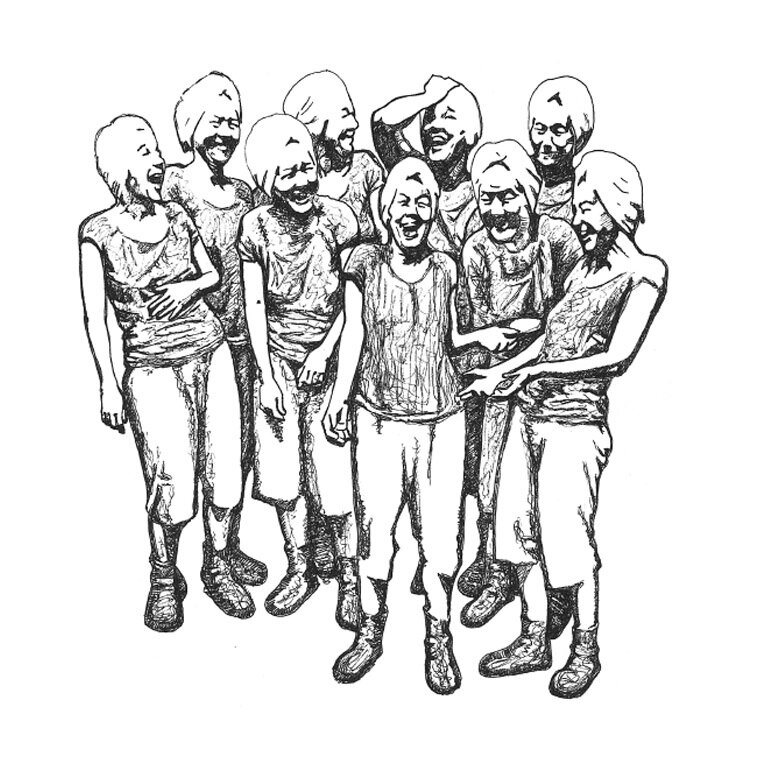 I've made a few variants but I don't know which of them is/are correct:

I think the first one is correct. I think it is featuring obvious opposition of laugh and hysteria. In the second sentence, in my view, there is something negative (like it was said in a fight). I like the word order in the first sentence more than in the third.

laugh (verb): to express mirth, pleasure, derision, or nervousness with an audible, vocal expulsion of air from the lungs

hysterical (adjective): of, relating to, or characterized by hysteria

All are mostly grammatically correct but all differ significantly in meaning. I take it that the original sentence is attempting to express the juxtaposition and contrast of laughter and the extreme expression of hysteria. In which case:

The indefinite article indicates that a noun refers to a general idea rather than a particular thing.

"Brain was given to man" doesn't read right, "brain" should be used with an article and referred to as "a brain".

Also, the subject is missing, a human doesn't get "given" a brain like one would be given a birthday present, it reads better like "God gave man a brain" or "man biologically evolved a brain". In this context the correct structure would be something like "A brain was bestowed upon man" or "Man was granted a brain". You could say "man was given a brain (by a god or creation origin concept)".

Then with the second part, hysterical is an adjective that describes man, hysteria is a noun. The tricky part is that the comparison needs to be made between a verb and an adjective so I think "to laugh" and "to get hysterical" is fine and works.

"A brain" was not solely given to man to laugh, this is how the sentence reads.

If I was writing this in English from scratch I would use something like:

Not the answer you're looking for? Browse other questions tagged sentence-construction word-order negation sentence-choice sentence-usage or ask your own question.

2
“As if I had been hit” vs “As if I was hit”
1
The phrase order to convey the order of events
4
When does a comma precede “because”?
3
How to ask about someone's study?
3
Trying to understand both the grammar construction and the author's intent: Although (being) of the opinion that… /Destite the opinion that
1
What does “might as well have” mean?
1
Used to have to meaning
2
Comparison “as.. as..” word order
0
What's the correct order of negated adjectives?