What do you call the imprinted pattern left behind a car in mud?

What's the name for this ... chase? stria? groove?

In Czech, we call it "stopa" - which literally translates as "footprint" but has a lot of other meanings as well so I can't really work out which of the tons of the English translations I should use here. Trail? Trace? Vestige? 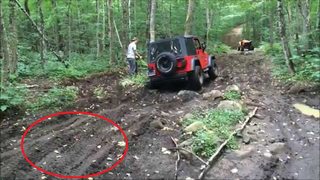 In British English it's "tyre", and it's "tire" in American English.

In AmE, they would be called "tire tracks". Possibly also "tread marks" but that would more likely be used for marks left on a hard surface like concrete or pavement.

The phrase you are looking for (in BrE at least) is tread marks. They can also be called tyre tracks.

These are not specific to tread patterns left in mud, but can also be used if a vehicle leaves rubber tyre marks on a hard road.

As a non-native English speaker the first thing that came to mind is (mud) ruts.

Ruts aren't necessarily limited to tyre treads or mud (i.e. ski tracks in the snow would work too), but as far as I'm aware they generally do refer to tracks made by vehicles.

I'm repeating other the content of other answers, but only because I want to clarify that they are not necessarily correct, depending on exactly what you're referring to and how specific you want to be:

The tread of a tyre is the rubber on its circumference that makes contact with the road or the ground - the black bit. You also have a tread on your shoe. Tread marks (also commonly known as skid marks, as they are most often caused when vehicles brake hard and skid) are generally the black marks left on the road or elsewhere by tyres (this is the same reason why you're requested not to use black-soled shoes in an indoor gym, so you don't leave tread marks on the gym floor). While it is true that the imprints of the tread are visible in the mud, these aren't tread marks in a strict sense. 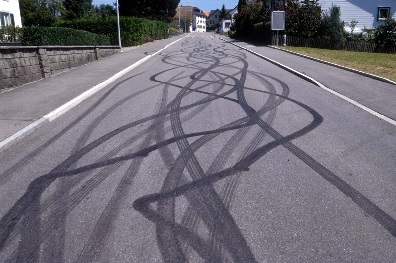 A rut is a a long deep track made by the repeated passage of something - most often made by the wheels of vehicles, but can also be made by water flowing downhill, by animals following a game trail, and so on. It is not specific to vehicle wheels. 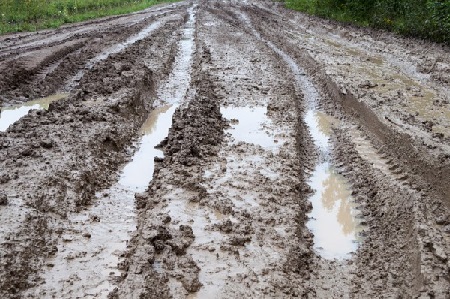 Example image of vehicle ruts in mud - note that tread marks are sometimes, but not always, visible inside the ruts.

To answer the OP's question, the patterns left in mud specifically by vehicles would be called tyre tracks, which is a fairly literal definition. Although we can distinguish the tread of a tyre from the tyre as a whole, it's a much finer point of semantics as to which made the track in the mud (you could just as well call them wheel tracks or vehicle tracks, but these phrases are not commonly used and are less accurate). 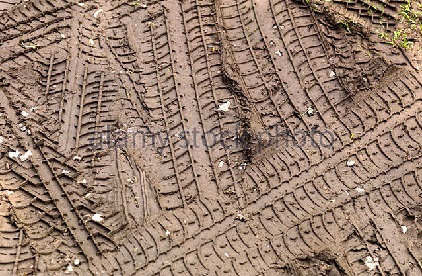 The word "track" is the closest literally to stopa -- they both can also mean to follow (as if by following footprints or hoofprints), and both have the secondary sense of a section of music (probably the Czech word is a calque).

As for "rut", that has the meaning closest to the marks showing in your picture, but its secondary meaning, "a fixed routine" especially one you would like to break out of, has grown to overshadow the original use. Also, there is the fairly rare sense of "to copulate".

Not the answer you're looking for? Browse other questions tagged word-request vocabulary image-identification .

0
What do you call this object?
3
What do you call a team which it's players play in a very coordinated way?
3
What do you call the small tube with ink in a pen?
4
What would be the equivalent of "Grundlagen" from German in a scientific paper?
0
What verb should I use for someone who 'deal with' internal circuits very well?
1
What’s a word for a motif which is being overused and became boring
0
What are the names for physical compounds of letters?
0
What do you call the furniture behind of which a speaker talks?
2
What is the best word for how an academic paper or other text is organised?
0
Is "steering document" a word in English?