Is there proverb about war and mother?

In Ukrainian, there is proverb "Кому війна, кому мати рідна". I would translate it into English as following: "What is war for one, that is mother for another". This means that while some people are suffering from war, some other people are making money from it.
Is there English proverb with a meaning like that?

There is a saying "War is good for business". Googling that will bring up lots of references, including, for Star Trek fans, #34 of the Ferengi Rules of Acquisition: http://www.sjtrek.com/trek/rules/.

The expression is intended somewhat to have "shock value", since people normally think of war as bad. So the dual nature of war is implied rather than the negative side needing to be explicitly included in the saying.

Writer Allen Ginsberg sarcastically adapted this expression for his famous anti-Vietnam War slogan, reimagined on this 1968 poster by Seymour Chwast: 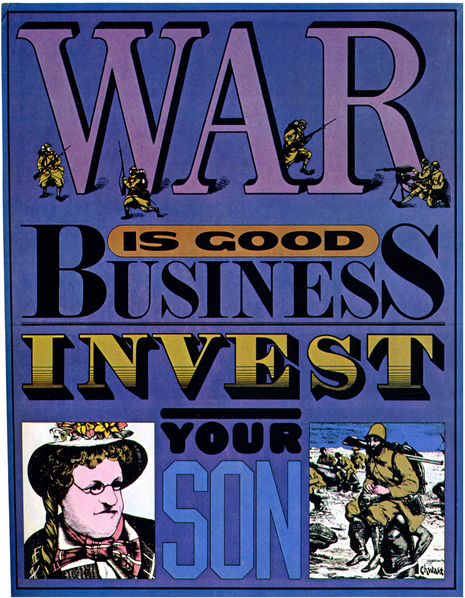 This one comes close:

One man's meat is another man's poison.

What is good for or enjoyed by one is not necessarily so for someone else.

Unfortunately, this one sounds too homespun:

One man's death is another man's bread.

So let's make one up:

Death is always a good investment.

Not the answer you're looking for? Browse other questions tagged translation proverbs or ask your own question.

11
Is there a proverb that means “to solve two problems at once”?
5
Proverb request: too much of something makes its value decrease or disappear
3
The English equivalent of the proverb “They sowed 'if', but it didn't grow”
2
I need a proverb
1
Is there a specific word for financial records?
2
Idiom Many go out for wool and come home shorn
2
A proverb to imply the message that: “To all mothers their children seem to be the most beautiful”
0
A proverb / an expression to imply: “One can manage their own affairs”
1
A proverb about the belief that “there is a downhill for every uphill”