Word for making a statement, consciously left open to interpretation while maintaining plausible deniability for any interpretation

As the title says: I'm looking for a single verb to describe the act of making a statement that is consciously left open to interpretation, with the purpose of instilling a certain interpretation within some people, while at the same time maintaining plausible deniability for that interpretation to others.

It's something politicians and other public figures tend to be good at. The direct motivation for me asking is that the act was recently covered in the satirical late-night show Last Week Tonight in a segment on Ivanka Drumpf. However, no term for it was mentioned.

When we imply something, we are doing exactly what you said: making a statement that is consciously left open to interpretation.

As for the part about "maintaining plausible deniability," you just have to remember:

We imply while others infer.

What I mean is that because we leave things "open to interpretation," it's possible for things to be interpreted in a way that we had not intended (as many politicians, celebrities and other people of interest may often attest to).

Or perhaps, it is possible for things to be interpreted as intended, but vehemently denied (as in your example).

Or perhaps, not denied, as in the example below: 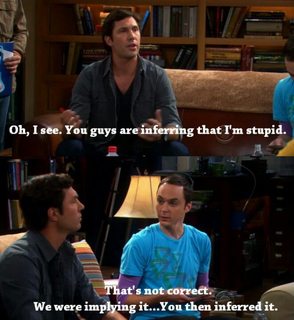 Imply: indicate the truth or existence of (something) by suggestion rather than explicit reference

Infer: deduce or conclude (something) from evidence and reasoning rather than from explicit statements

And a funny alternative: 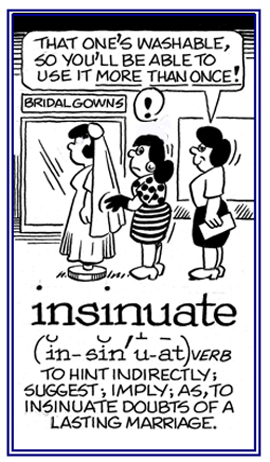 2
word for looking at other place while thinking something
0
word for making money from a situation
1
Looking for a word meaning "On the left or right, or both (left and right)"
6
Word for unused in a while?
2
A word that means women are only good for making babies?
1
Is there any word for "re-act?"
4
Word for someone who doesn't know any latest trends?
2
Any alternative for the word "apply" in this context
0
Which word is for any going-out event?