As you know, Adverbs can modify Adjectives, Verbs and other Adverbs; however, focusing adverbs seem to show different characteristics regarding it.

Focusing Adverbs vary according to their placement and can modify Nouns, Noun Phrases, Verbal Phrases..

So, my question is: Are focusing adverbs exceptions for such a rule?

Examples of focusing adverbs modifying different parts of the speech:

According the the Merriam Webster site, only can be an adjective... 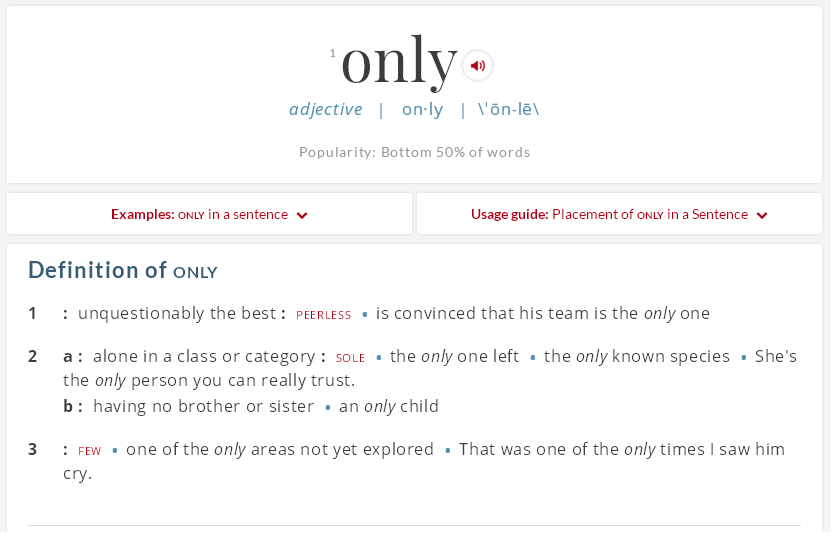 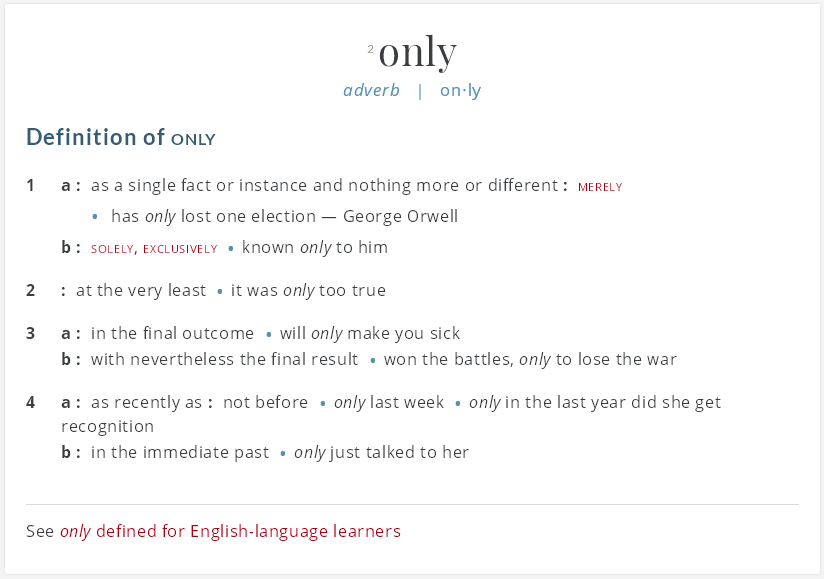 I'm not sure I see any consequence to classifying the word "only" as an adjective or otherwise, but I think that's a fairly good analysis.

P.S. Merriam-Webster uses the words "only one left" to illustrate the adjectival use, and "lost only one" to illustrate the adverbial use. I don't see how they're looking at it. Maybe they understand Orwell to mean, absurdly, that he only lost one, he did not tie it or win it. It seems more natural to me to think that Orwell meant that he lost only one, not more than one; that would lead me to classify the example as adjectival, despite the word order.

In your first example, I believe "only" plays the role of an adjective, not an adverb! It tells us more about the subject, "I".

Apart from Pre-Head and Post-Head modifiers there are some External Modifiers that a Personal Pronoun can take. One such modifiers are Focusing Modifiers (realized by adverbs like alone, only, also etc.)

The syntactic constituent that the modifier -only - modifies is the Personal Pronoun - I or her.

These examples are quite different from the sentence below in that the modifier - only - syntactically modifies the whole clause.

There is only silence. [only modifies there is silence]

In the following sentence only modifies the whole Verb Phrase (VP).

This is how Modern Grammars treat Focusing Modifiers.

It is to be noted here that there can have multiple focus element for a single Focusing Modifier. And hence the meaning might change. The focusing element can either occur inside the constituent that the the modifier syntactically modifies or can occur outside the constituent.

Not the answer you're looking for? Browse other questions tagged adverbs or ask your own question.

16
Are words ending in -ly adverbs?
2
Fast and Quickly; adverbs
2
Why are these adverbs sentential, and not regular, adverbs?
0
The number of adverbs in a sentence
0
Succeeding adverbs
1
“Someone was refreshingly honest when […]”: is the adverb an obfuscated adjunct?
1
Understanding Adverbs
1
Adverbs for the verb “overlap”
0
Are conjunctive adverbs limited or open to addition?