Man and woman running; caption "This could be us, but I hate running and you don't exist"

On a picture of a man and woman running side by side: 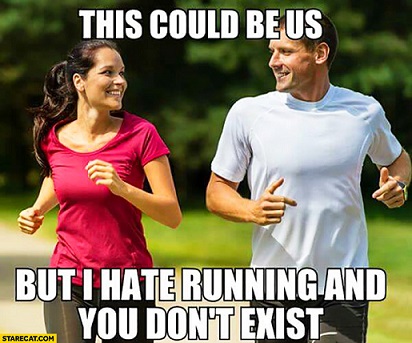 This could be us, but I hate running and you don't exist.

You can interpret the bottom portion as the "truth". The truth is that "I" hate running. You don't exist could be interpreted in a few different ways. One is that you in fact don't have a boyfriend/girlfriend or friend you could run with. Another is that your ideal girlfriend/boyfriend or ideal friend doesn't exist. Regardless, the truth is "you" don't exist. These facts contradict the possibility of "us" being the pair in the picture. It was never actually possible. I believe this is called "misdirection" in comedy terminology.

1
Meaning of "beyond the point of"
1
Expressions "Stay low key"
2
Could you teach me this context?
18
Help me understand the word "Doggo" in this image
1
Help me understand the phrase from the image: "to nervously ask you to prom"
1
What does "delete" mean in this context (learning languages)?
0
Does this mixture make any sense - "one part irony to one part convention"?
3
"seeing as you don't know anyone but me" meaning in this context
0
I wonder how native English speaker perceives 'make' in this expression