What does “EVERBODY” mean in this message?

I didn't get the fun part of the message inclined here. Can anyone explain what "EVERYBODY" mean in here. 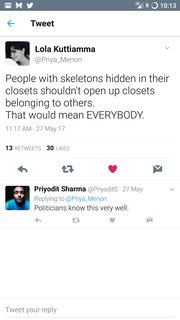 It is not a joke, it is a warning.

It simply means that everybody has one or more skeletons in their closet.

What may confuse you is the expression having a skeleton in your closet.

It means that you have a secret, something you do not want other people to know about.

So what the tweet means is everybody has something to hide, so you shouldn't be trying too hard to uncover other people's secrets. If you do, your secrets might also be revealed.

It literally means everybody: every human being.

The tweet is a reference to this well-known proverb:

The proverb means that if, say, you are frequently late, then you shouldn't criticize others for being late, or if you play music loudly, then you shouldn't tell others that they are playing their music too loud. In other words, people who have a certain flaw shouldn't criticize others who have that same flaw. The conceit is that if you live in a glass house and you throw stones at someone else, they could retaliate fairly by throwing stones back at you—which would hurt you especially badly because you live in a glass house.

The point of the tweet is that everybody "lives in a glass house" when it comes to having skeletons in one's closet—which is yet another figure of speech.

Not the answer you're looking for? Browse other questions tagged meaning-in-context jokes or ask your own question.