What are the forehead sides which lack hair called in English?

Some people, when they grow up and become adults, tend to lose their hair on the sides of the forehead. What are these places called in English?

I've checked in my language dictionaries and I didn't find a translation for this word. In translation from my language these places are called "bays", but it seems that this term is not valid in English for the condition that I described above. 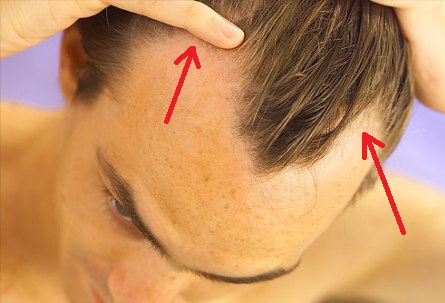 I'm not sure of a name for the "bays" of the head, but the hairline itself is referred to as a widow's peak. This idiomatic term has fairly old origins:

The term stems from the belief that hair growing to a point on the forehead – suggestive of the peak of a widow's hood – is an omen of early widowhood.

More general terms you can use are phrases like receding hairline to denote the hairline moving up one's head as they stop growing hair. As for terms for the "bays", something like bald patches or bald spots might be close to what you're looking for.