OneLook Dictionary search doesn't list a single dictionary that has an entry for trick of the loop, so I am still not sure if trick-of-the-loop man is a juggler/legerdemainist. Can it also mean imposter? Is this a Hiberno-English term? I had found it first in a collection of Irish short stories. Google gives me mainly Irish results, but only a handful.

This is the sentence where I had seen the term first:

Father had begun taunting him of being nothing more than a trick-of-the-loop man and scarcely better than a tramp.

The story is The Illusionists by Brian Friel and was released in 1962. The person the father is talking about is actually some kind of illusionist.

Trick of the loop is a particular con game. A trick of the loop man would be a two-bit hustler, without the skill and dexterity implied by juggler or legerdemain. The father is implying that the illusionist's purported skills are cheap tricks that only a rube would be fooled by.

Specifically, trick of the loop is a con in which a rope is knotted into a figure-eight. The mark (person who is being hustled) tries to grab the intersection so that when the rope is pulled away, he has it between his fingers. Due to the way it is tied, the mark rarely wins, or only when the stakes are low.

I found a source: http://www.worldwidewords.org/articles/ar-gal4.htm

One gambling game required a leather belt, garter or string tied into an endless loop. The man in charge twisted it into a figure-of-eight formation and asked someone to put a finger into one of the loops thus made. If the string snagged on his finger when the string was pulled away, he won. The trick was that there were two ways to make the figure-of-eight. In one, the game was genuine, with one loop snagging and the other not; in the other, neither did, and the victim always lost. It has been known under many names: pin and girdle, prick the garter, trick of the loop and strap game, but it has been commonly known from the sixteenth century and after as fast and loose, using fast in its sense of something fixed or immovable.

Here's the San Francisco Law outlawing it, from 1903 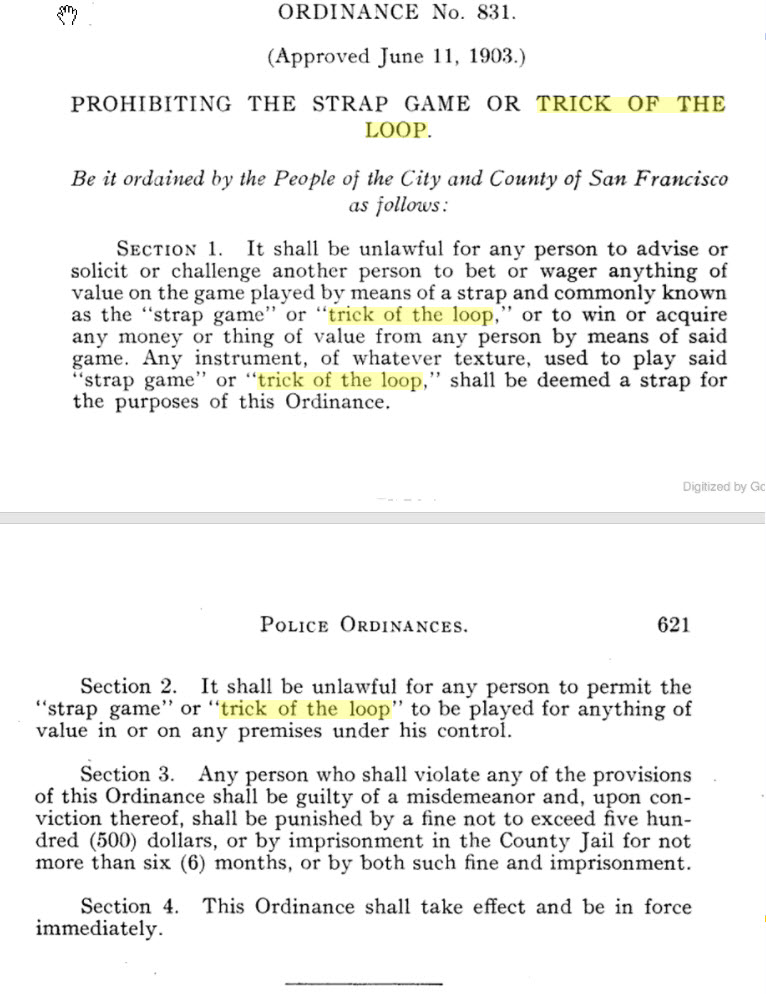 As a native speaker of North American English, I have never heard this term in my life, but your conclusion based on your use of deduction and context clues is exactly what a native speaker would arrive at. I would wager that this is a regional and/or archaic term local to the author's home or era.

Various googling suggests this was a gambling game, which could be literally the fathers job, or an implication the father was a con man. The game itself seems to have been banned in San Francisco, otherwise little detail is available.

"Trick-o`the loop" is "out of the same stable" as "The Three Card Trick”, etc. It was practised by “tricksters” at "Cattle Fairs" and similar gatherings in “old”, rural, Ireland, in order to “relieve" gullible country people of their money. My late father, who was born in the 19th century, frequently used the term in the way Brian Friel used it.

3
What does “a man of comforts” mean?
3
it’s every bit as possible to loop reliably - don't really get this
2
What does “a man apart” mean?
1
what does “under no circumstances should you approach the man”?
0
What does “Place your man” mean?
1
talked to the man dancing
0
What does “man” (verb) exactly mean?
0
can I say “he /she is a unicorn”?
0
does “a less mercenary man” means “a man who is not mercenary”?