Where can I use "arrive to"?

I know the difference between arrive at and arrive in, but where can I use arrive to?

A car arrived to the gate.

Should I use arrived at?

Supplemental to other answers

Arrive to is rare in present-day English, and I advise you to avoid it; but it was at one time more common. Robert Baker, Remarks on the English Language, in the Manner of Those of Vaugelas on the French; Being a Detection of Many Improper Expressions Used in Conversation, and of Many Others to Be Found in Authors, 2nd Ed. 1779, not only concedes its propriety in figurative uses but acknowledges, even as he scorns the use, that “people of education” employ it: 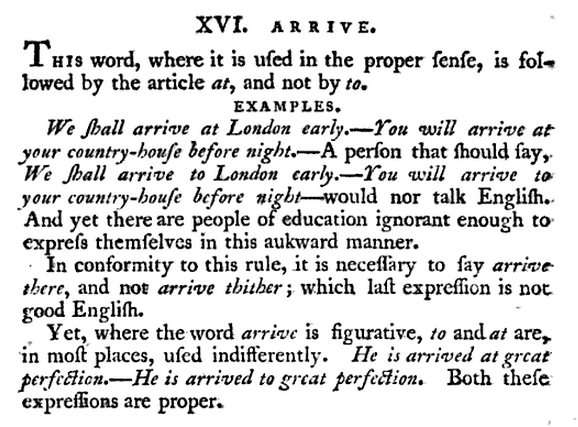 In this case, it should be

A car arrived at the gate.

At is used for specific locations (as in , the gate) However, for cities and countries, it is arrived in. So,

So "arrived in" is for more general/broader locations, while "at" is for specific locations. Note: "at" is also used for time:

In general, "arrive" should not be followed by the preposition "to", since "to" implies movement, whereas "arrive" does not. ("Arrive" implies accomplishment of movement, not the movement instead.)

Jane arrived to take a test.

where the location is implied and the sentence actually means:

Jane arrived in New York to take a test.

Colloquially, the "in New York" might be omitted if obvious.

To is a preposition that expresses a consequence or a purpose and will be followed by a verb clause.
- A car arrived to save us from walking all the way home. (Consequence of the car arrival : we did not have to walk).
- A taxi arrived to pick us up. (We'd ordered a taxi and it came with the purpose to pick us up.)

---Edit ---
I've answered within the scope of your question (i.e. use of to after arrive). Obviously to can express location if used after a verb of movement:
- I walk (drive/fly/swim/skate/crawl...) to work every weekday.

Not the answer you're looking for? Browse other questions tagged word-usage prepositions .

10
Why is it "arrived in" and not "arrived to" or "arrived at" in the following sentence?

2
Can we use the verb "arrive" with the preposition "to"?
1
the verb "Arrive" with no preposition
0
I just arrived to New York city
3
"arrive" Vs. "reach" what are the differences if any?
8
Arrive to or arrive at?
2
What is the difference between: Everyone has come VS Everyone has arrived?
0
Where will it stop/come up to and which platform will it arrive on/come on
1
Why does Grammarly say "arrive IN class" but "arrive AT the store"?
0
Is it correct and natural to say "arrive to my phone number"?