Help me understand the word "Doggo" in this image

I study English, I like it very much. Help to figure out. "Doggo" it is not clear in the context. Please explain how a native English speaker understand this phrase. Maybe we can replace the word "Doggo" in other words "Pause". 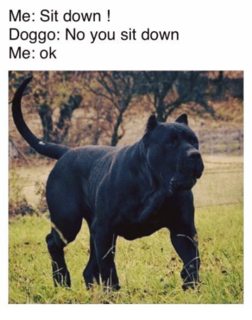 It's internet slang for dog:

Doggo is an internet slang term for dog, which is often associated with the word pupper in various ironic meme communities online.
(Know Your Meme)

I guess you can think of it as a humorous way to say dog. I've never heard anyone say this in person, but I imagine that there is a very small number that do (like LOL) in casual conversations.

However, appending the suffix -o to form derivatives is not uncommon:

Returning to the dialogue:

Dog/doggo refers to the dog in the picture. He seems quite large and intimidating. If he ordered me to sit, of course I would listen!

1
Meaning of "beyond the point of"
2
Meaning of "ascertainment" in a medical article
2
What is the meaning of the word "cast" in 'a cannon can dominate us without an iron-monger to cast it'?
2
Man and woman running; caption "This could be us, but I hate running and you don't exist"
1
Expressions "Stay low key"
1
Help me understand the phrase from the image: "to nervously ask you to prom"
0
What does the word "its" in the phrase "its implications" refer to?
1
What does "delete" mean in this context (learning languages)?
0
How and when to use " Probably" when it's compared to " Maybe "
0
Can the word consider be used in this context?