How could adjective come after verbs such as the following sentence:

He spoke nary a word until they arrived.

I checked the word nary up and I saw that is adjective, means not a single, but as known, we use adverbs after verbs.

Moreover, the dictionary mentioned that nary is a dialect. Does that mean this words is only used in a specific area or state? 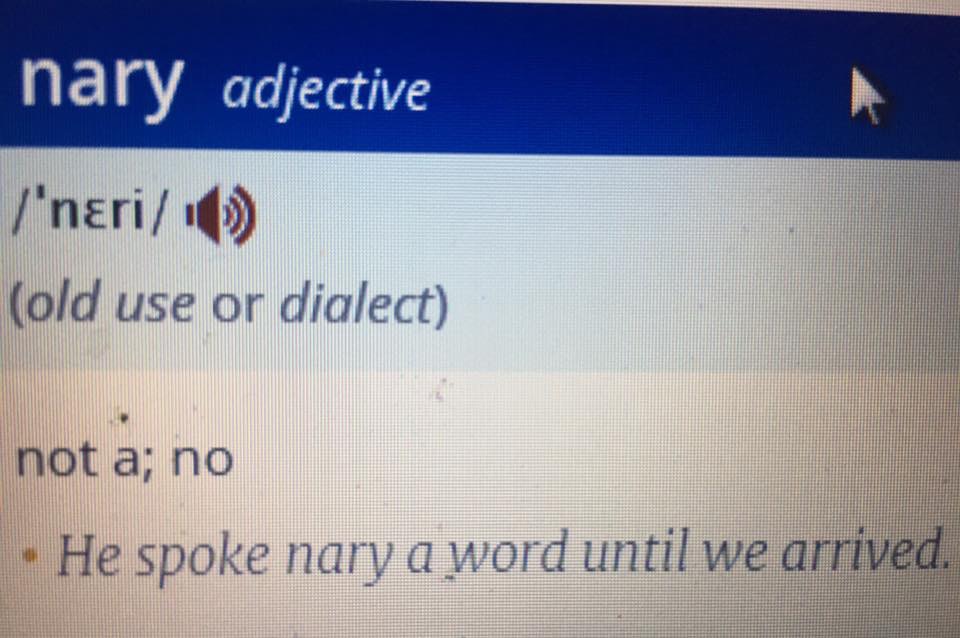 Where nary survives today it is (at least in all the dialects I am familiar with) used exclusively in combination with a. In that context it could be taken in its original sense as the adverb = "never" or "not" qualifying a. In practice, however, nary a is a fixed phrase which acts like "no"—again, a quantifier/determiner.

It falls immediately after the verb because it is the introductory piece of the noun phrase nary a word, which is the Direct Object of the verb.

An object is a noun or a noun phrase. A noun phrase often includes adjectives. So for example, "I see dead people." The thing I see is "dead people". "People" is a noun", and it is modified by the adjective "dead".

Yes, an adverb may follow a verb when the adverb is modifying that verb. "I ran quickly", etc. But if there is no adverb and the verb is transitive, then the next word after the verb could be a noun or adjective. (It could also be a preposition, as in, "I sat on the chair". Etc.) I think you're getting confused by the difference between "an adverb follows the verb it modifies" and the fact that almost ANY word could follow a verb, depending on the organization of the sentence. The next word after a verb may not be a modifier for that verb; it could be some other word that just "coincidentally" follows the verb.

"Nary" is a fairly obscure and rarely-used word, but it means "none" or "not". It's almost always followed by "a" or "an", as in "I saw nary an honest man among them", meaning, I did not see any honest men among them.

Not the answer you're looking for? Browse other questions tagged meaning meaning-in-context grammar adjectives grammaticality-in-context or ask your own question.

1
“I'm going to finally start” or “I'm going to start finally”?
2
Hyphenation of adjectives composed of three words
0
“Extremely furious”, or just “furious”?
1
What is the meaning of “quite” in the sentence “You are quite from me.”
60
Why can “low” become “lower” and “lowest”, while “up” can't?
0
Which part of speech is “left” in this sentence?
0
What does “such, so, eventually” mean?
0
“This extreme…” or “This extremely…”?
0
What is the meaning of “gastric percolation” in the context?