Person with a long forelock

How can I call a person who has a long forelock? I've tried to add suffix but I'm not sure about it.

"Forelock" in Russian is "chelka" and a person with long forelock we can call "chelkastyy". Is there analogue in English?

Here is an example: 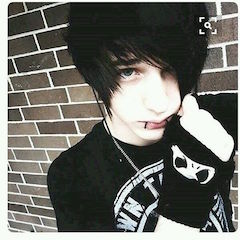 Some languages are rich in specific descriptives for persons, and English has its share, but in this case the Russian is richer.

The term longhair at one time connoted a person whose taste in music tended toward the "classical" (Bach, Beethoven, et al.) and more recently it connoted a rebellious young male, as in the pop song "Your Mama Don't Dance". However, the term referred to the length of the entire tonsure, and not specifically to the bangs as does the Russian челкастый.

We don't call persons with long bangs covering their eyes anything specific in English. We do have terms for the social groups among which such hairstyles are popular ("emo", e.g.) and for the wearers of such a style within those groups ("hippie", e.g.) but we have no generally applicable term for all wearers of such a style regardless of the group to which they might belong.

I suggest that you call them "chelkastyy", and when folks don't understand, take the opportunity to teach them a little Russian!

In general, Americans would call this "hair in his eyes", and would refer to that part of one's hair as the "bangs" in the same way you call it "chelka".

That particular look in the picture you linked would either be called "emo", "scene", or "hardcore", usually with the word "kid" such as "emo kid", "scene kid", "hardcore kid". This is a subculture and a style of dress/grooming and applies to males and females.

Back to the word "bangs", now. Aside from saying he "has his hair in his eyes", you could say he's got "long bangs" or describe them as "side-swept bangs". Some would also refer to that as similar to a "Bieber cut" after the hairstyle pop singer Justin Bieber had in his early to mid teens, but that's typically inclusive of hair colors other than black, as seen in the picture.

Not the answer you're looking for? Browse other questions tagged word-request adjectives word-formation or ask your own question.

2
What do you call a person who easily communicates with others?
10
Word to describe a person who spends extremely little money
3
Is there a diminutive form of adjective in English language?
3
What can I call the English-speaking section of the Internet?
3
The second person in conversation
0
What do we call to the person who can write many words in a day?
4
a person who works in a copy shop
0
Words for Deserved/Given vs. Arbitrarily Self-Chosen Nickname