I do not really understand the proposal: "Don't hate Monday. Make Monday hate you"

Please explain. I like to learn English. I do not really understand the proposal: "Don't hate Monday. Make Monday hate you". Help me to understand this sentence. I am very interested in this phrase.

It will be right or I not correctly think? "Do not hate Monday. Hate the person who created the Monday".

The phrase was taken from pictures: 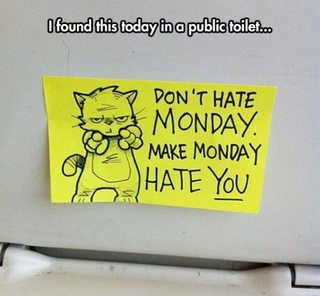 I do not really understand the proposal: "Don't hate Monday. Make Monday hate you".

Well, it's not really a 'proposal' or offer. It's a motivational phrase intended to inspire the reader to have a better mood and be more productive.

It will be right or I not correctly think? "Do not hate Monday. Hate the person who created the Monday".

No, you're not thinking about it correctly. 1st, Monday is a name, so it doesn't have an article ("the") unless you're talking about a very specific Monday. 2nd, the ancient astronomer who established the planetary hours is entirely irrelevant. People don't hate Monday as a day of the moon; people hate Monday as the return to the work week and its early wakeup time after the respite of a weekend. It's not Monday that's hateful; it's work itself but, that said, people don't usually want to be unemployed.

"I hate Mondays" is just a bit of self-indulgence (when spoken to yourself) or commiseration (when shared with others) that has become a pat cliché in most of the English-speaking world. So, getting back to the heart of your question:

is the kind of thing a fairly clever manager would put up in a bathroom after a continuing education course on business psychology. The idea is to take an unhelpful and counterproductive tendency in the staff and, somehow, shunt it into a more productive direction. In this case, the lazy self-indulgence that "I hate Mondays" might condone is being converted into righteous anger against a personification. The idea is the worker, instead of slacking off, will focus on "defeating" her or his "enemy" Monday by working so hard that it's caught off-guard and worn out.

The actual staff will just smirk a bit, finish their slash, and continue on with whatever they were planning on doing already.

You can replace "conquer" with a pithier phrase, for example "own", or "beat the daylights out of" -- something that would make Monday "hate" you.

Monday is disliked as the start of the typical work week.

The motivational suggestion is to instead accomplish so much that you've conceptually made Monday work to where it 'hates' you.

Of course, 'Monday' can't feel or express emotion, the point is to make the reader feel good about Monday and what they've done.

On a similar note:

All right, I've been thinking, when life gives you lemons, don't make lemonade!

Make life take the lemons back!

I don't want your damn lemons!! What am I supposed to do with these?

Demand to see life's manager! Make life rue the day it thought it could give Cave Johnson lemons!

Do you know who I am? I'm the man whose gonna burn your house down

Mondays are usually hated, Monday tells you how it is, you don't have a choice, it sucks and that's why most people don't like Mondays.

Be the boss (of Monday)! Show it who's in charge. Don't suffer Mondays anymore, take control of them. Reverse the roles!

This is all very metaphorical and designed to be inspirational speech.

So here's a couple of things:

This is Peppy the Inspirational Cat. Drawn by October Jones (who also did "Text from Dog.)

He used to leave these on trains and take pictures so original poster's picture is wrong.

Anyway: Peppy delivers slightly "over the top" motivational messages. So when people say they hate Mondays, Peppy says "Don't hate Monday" meaning don't just hate a day... "Make Monday hate you!" Means have such a great day that Monday itself will be jealous.

It isn't perfect English and is laced with irony, sarcasm and double meanings.

Not the answer you're looking for? Browse other questions tagged phrase-meaning word-order direct-objects .

4
What's the meaning of "Quills and Sofas"
1
Can't translate the phrase into Russian language
0
A simple word order question: when turn "please come in" to negative
1
What does "delete" mean in this context (learning languages)?
3
What does "Right little ray of sunshine" mean?
13
Making sense for "How does it look like?"
0
"past harm" from The Hunger Games