Meaning of the word "Stones" in a quote from Californication

Here is a quote I heard on Californication.

"Here it comes, she thought. Another self indulgent, whiskey soaked, diatribe about how fucking great everything was in the past. And how all us poor souls born too late to see the Stones at - wherever, or snort the good coke that they had at Studio 54 - well, we all just missed out on practically everything worth living for".

Somebody please help me with meaning of the word "Stones" in the quote?

As far as I can say, the quote means the rock band The Rolling Stones.

They are sometimes referred to simply as Stones. In fact, they are mentioned even on Wikipedia disambiguation page for Stone.

That will be the The Rolling Stones, a famous Rock band, commonly known as The Stones.

Could you please tell explain then what should understand from the sentence "how all us poor souls born too late to see the Stones at - wherever, or snort the good coke that they had at Studio 54 ?

This means that the "poor souls" referred to are too young:

Studio 54 was well known for the excesses (which presumably included taking drugs) of the famous people who attended:

In the late 1970s, at the peak of the disco dancing and music trend, the building was renamed after its location, and became a world-famous nightclub and discotheque. The nightclub founders spent hundreds of thousands of dollars on professional lighting design, and kept many of the former TV and theatrical sets, in the process creating a unique dance club that became famous for its celebrity guest lists, restrictive (and subjective) entry policies (based on one's appearance and style), and open club drug use.

There are many photographs of the Rolling Stones attending Studio 54.

Here is one example of Mick Jagger and Jerry Hall: 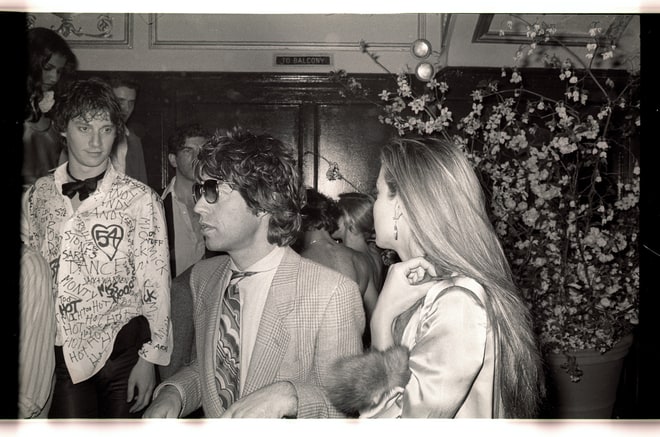 Bianca Jagger (the wife of Mick Jagger, one of the Rolling Stones) apparently rode a horse into the Studio 54 nightclub.

On May 2nd, Jagger celebrated in grand style. "[Halston] only had about 150 people. The best people, from Baryshnikov to Jacqueline Bisset," Schrager recalled in a 1996 Vanity Fair profile. One of the bartenders donned a diaper and popped out of a cake, but the highlight of the evening occurred around midnight, when a white steed was led out from behind a stage curtain by a nude couple slathered in shimmering paint and sparkles. The birthday girl took the place of honor astride the horse, which trotted across the dance floor while cameras greedily snapped.

She later denied that that this had actually taken place.

Not the answer you're looking for? Browse other questions tagged meaning-in-context word-meaning .