Past Tense or Past Perfect

I would like to seek your opinion on this sentence:

Ethan was washing his hands when the doorbell rang. He ran to answer it and forgot to turn off the tap.

Is it possible to use the past perfect tense 'had forgotten' to suggest an implied earlier action? Or should only the past tense be used because the conjunction 'and' suggests that both actions happen simultaneously?

To use a perfect tense you normally want to establish both the order and the relationship of the events in the sentence. It can't just be a sequence of events, because otherwise the simple past is fine:

I set my alarm before I went to bed.

By using the past perfect, it implies that something related happened afterward:

I had set my alarm before I went to bed, but for some reason it didn't go off in the morning.

With your example: yes, it's possible, but as you say, not with the conjunction and, and not with just the events as described. You need to rewrite the sentence to show that one event preceded the other, and then add some reason why the past perfect makes sense (such as a subsequent consequence for his forgetfulness):

Ethan had forgotten to turn off the tap before he ran to answer the door, and so, eventually, the house flooded.

You could use the past perfect progressive with "washing his hands" because there is a later, related event:

Ethan had been washing his hands when the doorbell rang, and as he ran to answer it, he forgot to turn off the tap.

Although the past perfect can certainly be used in this sentence to some effect, there are many other tenses in English which might also add variety and interest.

For instance, who can resist the oft-overlooked but piquant and enticing Conditional perfect progressive? If we combine it with the equally neglected Conditional perfect, an even more expositionally rich tapestry appears; and when we similarly plunge the other verbs into the obscure and gloomy depths of the Past perfect subjunctive, we can envision Ethan drowning in the effluent from the tap, which, trapped in syntax, forever fills his room with water, maybe. We're not sure.

The temporal relationships in the sentence are quite easily rendered in the form of a graph. The action plots against time as a quantity expressed in dashes, as below.

From his imagined vantage point in the future, Ethan looks back through the present, which is the past from his perspective (❶), and forgets whether or not he can remember not having heard the doorbell in the slightly less distant past (❸). The tap, which may or may not exist in the future, has the potential to be running in the present/past (❷), and the doorbell, which may or may not have been heard, rings at a supposed time (❹) removed by several units from the imagined present (not the current present, but the present as it exists from the perspective of Ethan's as yet unrealized future.Future-descendant unaccusatory temporal displacement †) (❺).

At last Ethan, unable now to decide whether or not he would have been washing his hands when the doorbell would have rung (or even whether he has any hands at all), in desperation attempts to barge into the imperfect future where, no longer able to determine his position in time with any accuracy, he exclaims: "The Unicorn!" and begins to flap his lower lip (❻). 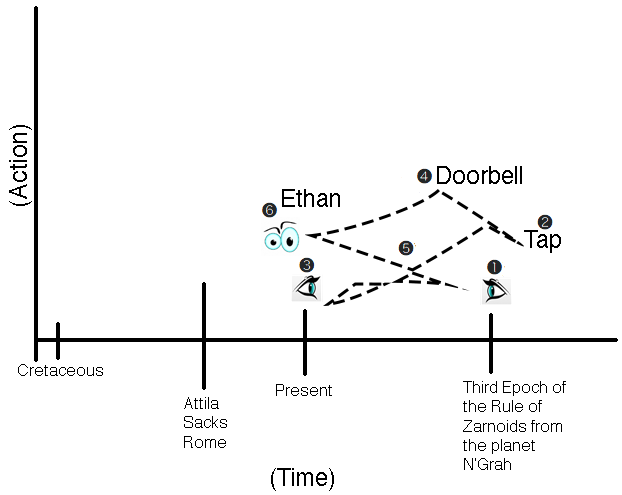 NOTE: Ethan's eventual dampness cannot be rendered, since it is conditional on an event that would have been happening in the imagined past from a perspective far, far away in the exotic Isles of Langerhans.

Not the answer you're looking for? Browse other questions tagged tense .