What's the difference between “stalk” and “stem”?

Oxford definitions for them:

1 The main stem of a herbaceous plant.
‘he chewed a stalk of grass’
1.1 The slender attachment or support of a leaf, flower, or fruit.
‘the acorns grow on stalks’

The main body or stalk of a plant or shrub, typically rising above ground but occasionally subterranean.
1.1 The stalk supporting a fruit, flower, or leaf, and attaching it to a larger branch, twig, or stalk.

The venerable OED (as well as your reference) uses each term in the other's definition, but they aren't really interchangeable.

The main stem of a herbaceous plant, bearing the flowers and leaves; also, a scape or flower-stem rising directly from the root.

The main body (usually more or less cylindrical) of the portion above ground of a tree, shrub, or other plant; a trunk, stock, stalk. (Ordinarily implying a greater degree of slenderness than stock or trunk.)

Botanists and arborists will usually use stem to refer to a slender portion of the plant, while stalk refers to something more substantial, often the main upright "load-bearing" portion of a plant's body. A stalk can bear several stems, but a stem cannot bear a stalk.

In her blog called BotanicalAccuracy.com, Dr. Lena Struwe uses rhubarb to bring into sharp relief the distinction between stem and stalk. Dr. Struwe does such a good job of it that rather than paraphrase it, I reproduce† it here against the possibility that her blog may disappear one day.

The inaccuracy that often is perpetuated with rhubarb is what we properly call the part of the plant we eat. The 'stalks' we eat are the edible part of the otherwise toxic plant, and they are the leaf stalks. The botanical, scientific name for this in English is 'petiole'. This photo shows clearly how each stalk is connected to each leaf. 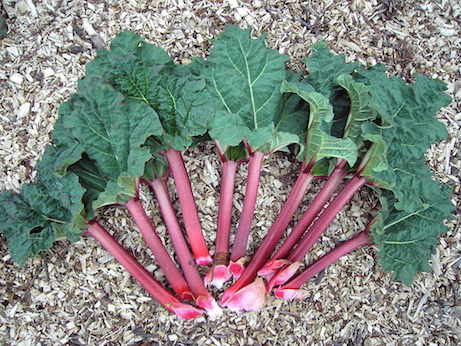 The problem is that many times people inaccurately call them rhubarb 'stems'. A 'stem' is a part of the plant that is a central shoot that holds the leaves, branches, flowers, and so on. The true rhubarb stem is a hollow, nearly bamboo-like cylinder, which leads up to a terminal shoot that eventually develops flower buds. A 'stalk', on the other hand, can be both leaf stalk and the stem of a plant. Here is a photo of a rhubarb stem with flowers and small leaves: 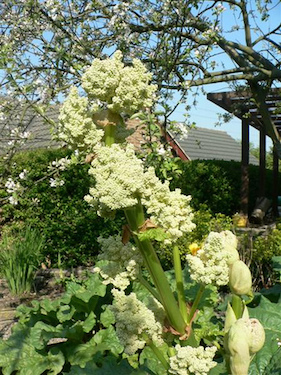 †I have taken the liberty of correcting a few disagreements in number, and adding a few changes for clarity in Dr. Struwe's text. She is after all a botanist, and not merely a harmless drudge.

In terms of the definition, there is little difference. As your example shows, one is used in the definition of the other. However, in practical use (in US English at least) there is a difference in the size or substance of the item being referred to. So, I would normally refer to "a corn stalk" but would never refer to a "flower stalk". The corn stalk is thicker than a flower stem. A stem is usually delicate and/or weak, while a stalk is thick and strong.

Not the answer you're looking for? Browse other questions tagged word-difference or ask your own question.