How do we understand “with” in this phrase “rice with chicken and broccoli”?

2 having, possessing, or carrying something

a tall gentleman with a beard

a book with a green cover

a man with a gun

We need someone with new ideas.

Only people with plenty of money can afford to shop here.

She came back with a letter in her hand.

So, if I say "I am having rice with chicken and broccoli", does it mean that "They are all in a plate" as in this picture: 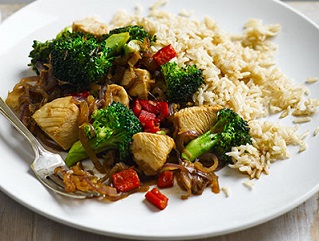 Let say a man have this meal (3 separated dishes) as showed in the following picture: 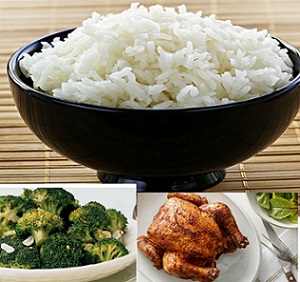 SO, would the man be wrong if he said: "I am having rice with chicken and broccoli"?

A preposition like with can have pages devoted to it, so it seems rather perverse to focus on one definition and question its applicability to your food scenario.

Among the meanings of with are

"accompanied by" as in pancakes with bacon and eggs

"having bits of something (as in an admixture)" as in chocolate chip cookies with walnuts.

You can choose which meaning fits your rice dish better. Are the ingredients separated, side by side, or one on top of the other? Stirred up together? You won't know until you see it. If it's take out, probably the former. If it's in restaurant, perhaps the later.

P.S. You could even be served (or serve) those three things in succession and still describe the entire meal as "rice with chicken and broccoli". It might not be the clearest way to go about it, but many people might do so. If you wanted to make absolutely clear that the items were served in succession, then you wouldn't even use the preposition with: We had rice, then chicken, then broccoli.

In the culinary context, "Rice with..." is a specific term indicating the secondary item is prepared, together, mixed in with the rice.

For example, Arroz con Pollo/Rice with Chicken is prepared in a single pot with rice, chicken, vegetables and other ingredients all cooked together.

If they are prepared separately and plated apart, that would be "Rice and Chicken" or "Chicken and Beans".

Not the answer you're looking for? Browse other questions tagged word-usage word-choice image-identification food or ask your own question.

15
The US/UK word for Turkish sandwich filled with meat, salad and sauce
20
“There IS/ARE rice, meat and tomatoes on my plate”
2
“and” with meals - eating separately or together
0
Eat both soup and meat with potatoes?

18
What do you call this thing that comes with any Apple product
2
How to say an animal (tiger, cat..) or poultry (chicken, duck) are saying?
5
Is paddy and rice same in English?
0
Difference between “food” and rice
0
Help to understand the usage of 'what' and 'but' in this sentence
6
What's this kind of chicken products package called?
2
How to understand “survive contact with” in this context?
1
How to describe this kind of jewelry?
1
How to understand the use of 'this' in this context