Difference between "uptown", "downtown" and "midtown"

I've noticed a frequent usage of the words uptown and downtown while watching movies made in the USA. Also the word midtown is seldom used.

What is the difference between them? Is possible they can refer to different places and areas in order what city I talk about? Is there a simple way to recognize what exact place the speaker speaks about?

This depends on what city or town you're talking about. Since you mention the US in your question, I'm going to answer from that point of view.

However, many towns only have a "downtown", which is basically the business district of the town and generally doesn't have anything to do with the cardinal directions (traditionally, such districts are centrally located). In fact, Cambridge Dictionary's American definition of downtown specifically references the "central part of a city". This is the most common meaning of downtown in the US.

On the other hand, the town where I live now only has an "Uptown". The town is built on a hill; our central business district is called "Uptown" instead of "downtown" because it runs along the ridge of the hill, so you must literally go up to get to Uptown from almost any other part of the town. Thus, when you say "I'm headed uptown" here you may be going either north or south, unlike in Manhattan. Another example of this is Charlotte, North Carolina, which also calls its "downtown" "Uptown" for similar historical reasons (and because they think it sounds cooler).

Unfortunately, this means that the only way to know for sure what is meant by one of these terms for a particular city or town is to look it up or ask a local. However, in most cases "downtown" will mean the city's main business district, wherever that happens to be.

Most cities have one and only one downtown. Few will have an uptown. The only midtown I know of is in Manhattan.

Metaphorically, downtown is the busy part of the city where things are happening. It is the area with the tallest buildings, or the greatest density, and is usually mostly commercial. It may be where the most well-known or wealthiest companies have offices, and it may also have the best entertainment options. You may "go downtown" to work, our out for "a night on the town".

For example, this is downtown San Diego.

This is pretty much everywhere else in San Diego (not an exaggeration). 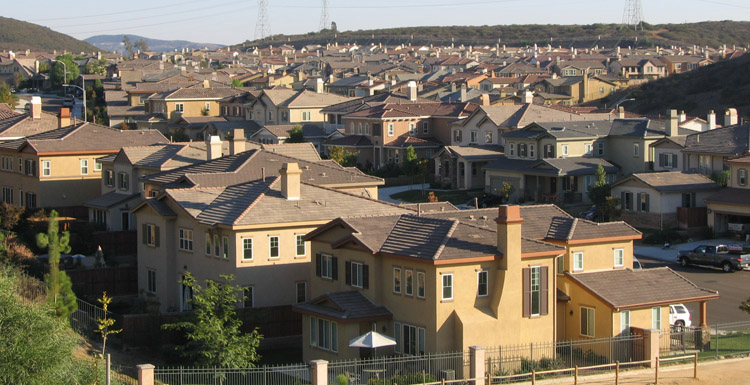 Uptown, metaphorically, is where the wealthier people live (for example "Uptown Girl" by Billy Joel). This may be why there are few "uptowns" in many cities, because they have no concentration of wealthy people. This is also why many businesses choose to use "uptown" in their names, because it can sound more sophisticated.

The directions of “down” and “up” once referred to elevation of the town structures: Uptown was up, away from the local waterways, and downtown was nearer to them.
Downtown was where most of the commerce, trade, and popular gathering happened; uptown was where the wealthier folks lived.

Eventually people began using the words to describe the socioeconomic condition of respective parts of the town or city (habitation), and not whether they were actually higher or lower on the terrain.

Early, there wre poorer people eking out a living in the downtown areas because they couldn't afford to live uptown. The wealthier would prefer to live as far uptown as they could. As the place gets bigger, you'd always have a difference in income, but it becomes more gradual with the emergence of the middle class and with expansion of both the downtown and the uptown areas.

Not the answer you're looking for? Browse other questions tagged meaning vocabulary .