As people began to go to more places and do more things, they were more interested in knowing the correct time. By 1900, almost every house had a clock, and nearly every well-dressed gentleman wore a watch on a chain tucked in his vest pocket. Today of course, we have electric clocks that keep giving the right time until they are unplugged or the electricity goes off. Scientists have invented clocks that look like large machines and tell the correct time to a split second. The most modern electric clocks for home use do not have faces or hands. These clocks are called digital clocks, and they tell, the time with a set of numerals which appear in a little window. The seconds are counted off like the tenths of a mile on the odometer of a car. Many electric clocks are combined with radios, which can sometimes be set to turn on automatically. Thus, instead of an alarm ringing in your ear in the morning, you can hear soft music playing when it is time to get up. Some clocks will even start the coffee maker! Although clocks and watches play an important part in people's lives in industrialized countries, time is still regarded in very different ways in different parts of the world.

A Google search has turned this text up as "Unit 4 Clocks through Time" and appears to be an English learning text.

Scientists have invented clocks that look like large machines and tell the correct time to a split second.

This can be interpreted as meaning that there are large clocks that have the appearance of some machine, where the purpose of the machine is unknown to the person seeing it. Imagine a steam locomotive in the eyes of a technologically primitive person, they may see it as a large beast with hard skin that roars and hisses, and exhales smoke and flame. The author is trying to convey an image to the reader, where the reader will fill in the details from their own imagination and experience.

A clock that tells the correct time to a split second is not quite like that (looks like a large machine), although perhaps the first atomic clocks were.

FOCS 1 (pictured) is a continuous cold caesium fountain atomic clock in Switzerland which started operating in 2004 at an uncertainty of one second in 30 million years. FOCS 1 is one of the most accurate devices for measuring time in the world. It stands in a laboratory of the Swiss Federal Office of Metrology METAS in Bern. 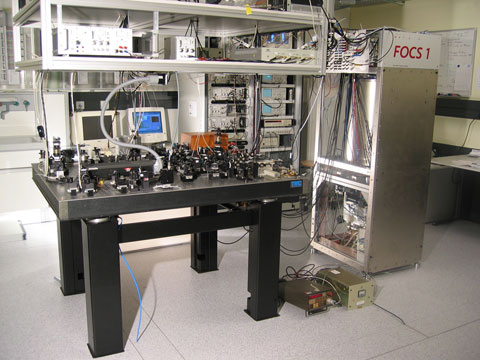